Last week, I made some broccoli patties. They were so good! I made several to keep in the fridge--excellent to grab for lunch. Today, I used different veggies to make a different version.
I had half a medium head of sweetheart cabbage (the pointy kind, but any cabbage would work fine). I cut it up into pieces and whizzed it in my mini food processor. 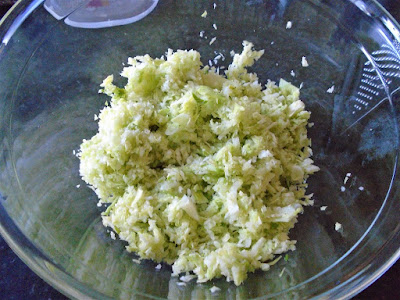 Then I cut a small bell pepper and a medium onion into chunks and whizzed them up as well. Finally, I grated two medium carrots. I added all these veggies to the cabbage. 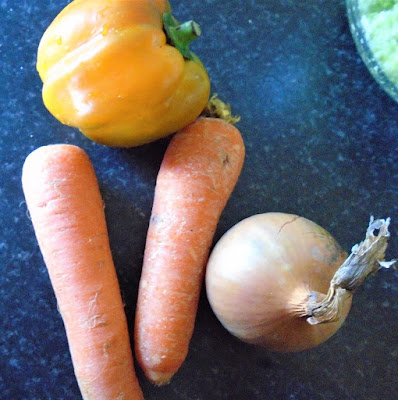 Then in went the herbs. 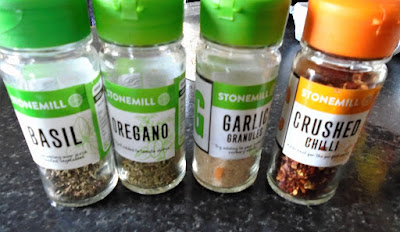 I also added dried parsley and black pepper. I didn't measure--just put in as much as I wanted and then mixed everything together. 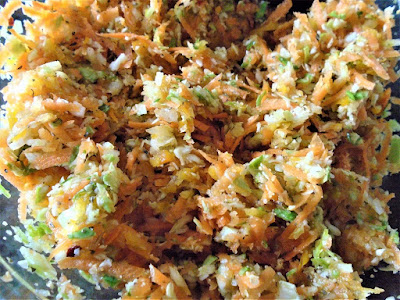 Time for cheese now--about a cup or more or less to taste. When I did the broccoli patties, I used all cheddar, but this time I had some cheddar and some mozzarella that needed using, so I dumped those in. I also had the end of a wedge of Parmesan, so I sliced that thinly and cut it into very small cubes (I stuck the rind in a small bag and put it in the freezer--these are good to toss in the pot when making soup--just remove before serving--imparts a lovely flavour).
Beat three large eggs and mix in. Then add about 3/4 cup flour or bread crumbs. I used oat flour (just whiz up some rolled oats in a food processor to make oat flour), but after I'd gotten everything mixed, it dawned on me that rye flower and caraway seeds would have probably been great too. with these veggies.
I lined a couple pans with parchment paper and spooned the mixture onto the pans, smoothing with the spoon. 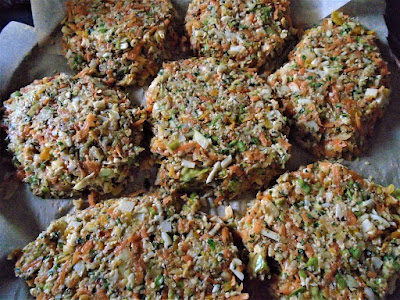 I baked these at 200C (about 390F) in a fan oven for about half an hour, until the patties were golden brown. 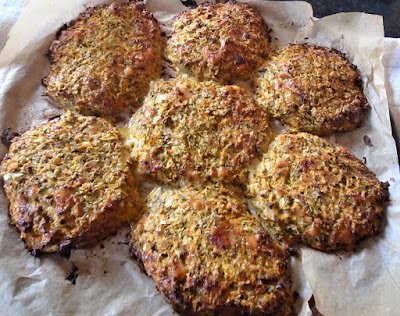 I love these! They're handy to have in the fridge and would probably freeze well, although I have not tried this. There are a lot of possibilities with these--by changing veggies, herbs, and spices, the resulting patties will vary in taste. These are easily adaptable and great for using up odds and ends, thus avoiding food waste. I made 10 patties today and I think 12 the other day--I made them thicker today. But I could have used fewer veg and then cut down on the cheese, flour, and egg as well.
When I made the broccoli patties, I used the florets from a 500g head of broccoli and whizzed them up in the food processor. I used half a large onion. All the rest was the same, except I used all cheddar cheese. I also added a tablespoon of olive oil, because the florets were more dry than the veggies I used today. I used a wee bit more flour today than I did for the broccoli patties because the mixture was wetter. I could have squeezed out the moisture from the shredded veg, but that would have been unnecessary bother, so I just compensated for this and it was fine.
They're good hot or cold, on their own or in a wrap. I suspect we'll be having many more of these in one form or another in the weeks ahead. 😋
Share
Posted by Shari Burke at 7.4.21

Yum...I sometimes add beets...or black beans or rice instead of flour...also my daughter-in-law gave me recipe for sweet potato and beans...all plus spices of course...so yummy

Oooh, those do sound yummy! Those are all good ideas! I definitely want to make some bean burgers--some to eat right away and some to freeze. My freezer is pretty full at the moment, so will have to use some stuff up first.

That sounds so good and I'm trying to find new ways to eat some veggies. I may be trying this soon.

Ohhhh, I love broccoli! Argh, I´m off, my food processor "died"...
Yes, I didn´t measure, either, yesterday... and produced cookies from hell! My neighbor took a bite. One. You cannot say with age you loose tastebuds, he does not, LOL.

COOL IDEA! Even Ingo could have them, baking, ... I need a new food processor.

Well. But what can I use instead of the oil in the broccoli? Ingo cannot have anything in hot oil. Butter? Butter, right.
OK, you just went to my cooking-list!

Vicki--Brenda has some good ideas in her comment above, too, for other possibilities :-)

Iris--I am a bit more careful about measurements when baking--LOL--sorry about your cookies. I wonder if anyone has written a funny book about cooking disasters--we all have them LOL

Yes, maybe melted butter instead of oil, an additional egg, or a bit of grated veg with more water content, like courgette. Leftover mashed potato?

You could probably chop the broccoli into small bits with a knife. It would just be chunkier, but that's OK. Hope you can get a new food processor soon, though :-)

I leave out eggs...I am vegetarian and mostly vegan also...still good

Been strict vegetarian since 1992...use vegan butter and cheese and avoid eggs...

I think people use flaxseed as an egg substitute. I tried veganism once and had severe migraines and my hair was falling out, among other issues. I had to give it up after a month or so. Whatever works! 😀

Many thanks for sharing your recipe, which sounds very versatile and many great vegetables to choose from. Yum!

Making some more broccoli patties tomorrow, now that I got a head in the weekly shop this morning :-)