We spent today in Letterkenny. We went there to look at the exhibit at the Donegal County Museum about women and politics. It was very informative, with information available in text, audio, and video. There were photos and artefacts on display as well. The one drawback was that it was quite warm inside and we were soon roasting. Still, I'm glad we went.

I took some pictures, but there was glare from the lighting and some didn't come out.  Here are the ones that did. 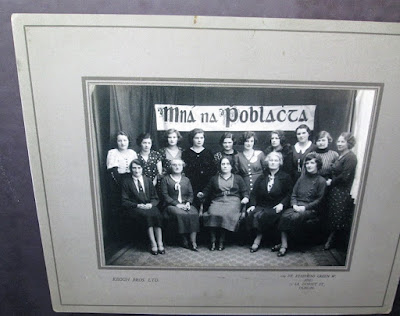 In 1990, Mary Robinson was the first woman elected to the office of President of Ireland. She served for almost 8 years and was succeeded by Mary McAleese. After leaving office, Ms Robinson became the United Nations High Commissioner for Human Rights, a position she held for 5 years. She continues to work on various human rights issues and last year, published a book called Climate Justice: Hope, Resilience and the Fight for a Sustainable Future, which I highly recommend. I wrote about the book here.

There are still not enough women in politics here, but more are starting to get involved and one of the major parties here, Sinn Fein, has a woman for leader and as the deputy, who is the head of the party in Northern Ireland.

After we left the museum, we went to grab some lunch. The little hole-in-the-wall burrito place we tried last time we were in Letterkenny has moved to a much larger space. The food is just as good. The poor young man who finished off our burritos was having a hard time wrapping them, so we knew we'd need forks. We come prepared, keeping a fork and spoon in each of our backpacks--comes in handy when we're out and about and lets us avoid the plastic ones. Single use plastic is on its way out here, and I know there are some disposable items that say they're compostable, but I am skeptical. I worked for a time in a so-called sustainable goods store and the owner sold what was marketed as compostable plastic silverware. One day he admitted to me that when the manufacturers tested this, they first used an industrial grinder to break these things down into tiny bits. Anyone who doesn't have an industrial grinder and just buries the stuff in the back yard was in for disappointment. So I'd rather bring my own regular utensils, purchased at a charity shop for the purpose, than use the plastic, even if it says it can go in the compost. My fork is washed and ready to go back into the pack for the next jaunt.