The Last of the May Books

These are the last few books I read in May.

Manual for Survival: A Chernobyl Guide to the Future by Kate Brown
In April, I read Midnight in Chernobyl by Adam Higginbotham. I’d read a review in The Guardian that included both that book and this one, so I requested both of them. They work well together, although I am glad they came in a month apart--it’s not light or happy reading, so it was good to have time in between. Where Higginbotham focuses primarily on people and circumstances that led to the disaster, how it happened, and then, to a lesser extent, on what happened to the people involved, Kate Brown looks more at the impacts of the disaster on people and nature. She also broadens out to look at how nuclear testing has harmed people and the environment and how countries like the US have attempted to cover up the results. She argues that the international community had incentives to downplay the harm caused by regular exposure to radiation at lower doses, to play along with a misleadingly low official death toll, and to assist in the cover-up. Also, she illustrates how flawed the thinking was as people were trying to calculate damage and exposure limits. Most of these calculations were based on a study of Hiroshima and Nagasaki survivors, but that longitudinal study did not even begin until 5 years after the bombs were dropped and the situation was different. The bombs provided a massive dose of radiation, while Chernobyl was a continued contamination. Different areas outside the exclusion zone had far more exposure than officials were willing to admit, so continued to live in contaminated areas, eat contaminated food, process contaminated wool, etc. There are reports about how well nature is doing in the contaminated areas, but her research shows that this is not at all the case. This was not a fun book to read, but it is an important work that is well worth reading.

When I Walk Through That Door, I Am: An Immigrant Mother's Quest by Jimmy Santiago Baca
Reading this was difficult and sad, but I think it’s a very important work. I came across it in the e-book section of the library website. Here is the description:

Jimmy Santiago Baca sends us on a journey with Sophia, an El Salvadorian mother facing a mountain of obstacles, carrying with her the burden of all that has come before: her husband's murder, a wrenching separation from her young son at the border, then rape and abuse at the hands of ICE, yet persevering: "I keep walking/carrying you in my thoughts," she repeats, as she wills her boy to know she is on a quest to find him.
“This slim, salient volume will open readers’ eyes wide to the true human stories behind blaring headlines about immigration policies and debates.” —Booklist, Starred Review “Jimmy Baca’s new book brilliantly reimagines the epic poem—and reshapes the epic hero as a young immigrant woman struggling to escape violence and find the child that has been torn away from her. A work that speaks strikingly and passionately of our times.” —Richard Blanco “[Baca] writes with unconcealed passion . . . both an intense lyricism and transformative vision.” —Denise Levertov “[Baca’s] voice, brutal and tender, is unique in America.” —Ilan Stavans, The Nation “What makes [Baca’s poetry] a success is its honesty, a brutal honesty, as well as his original imagery and the passion of his writing.” —Gary Soto, The San Francisco Chronicle

There is also a powerful author’s note at the end.

The Scent of Almonds and Other Stories by Camilla Lackberg and translated from the Swedish by Tiina Nunnally
I found this slim volume in our local charity shop and picked it up with the intention of bringing it on a trip and leaving it for someone else. I read it on our trip to Creeslough and left it on the exchange shelf in the Happy Camper Cafe. The book opens with a novella that comprises most of the book. I found that to be a bit long. The remaining three stories were much better and had some good plot twists right at the end. I’d not read any work by this author before, but I would try out more of her books now.

Artists in Crime by Ngaio Marsh
I finished the physical book I’d brought with me when we spent a few days away, so turned to my e-reader. I decided I might as well continue on with Ngaio Marsh’s Roderick Alleyn series. In this one, Alleyn is on his way back from New Zealand, where the last book was set. On the ship, he encounters an artist, Agatha Troy. Their meeting is an awkward one, with both making incorrect assumptions about the other. She ends up doing a sketch of Alleyn, which he gives to his mother when he goes to spend a few days with her before going back on duty at Scotland Yard. As it happens, Troy, as she is mostly called, has a large house nearby that is used as a kind of artist community, with different people coming and going at various times. These people are all at a different skill level and some want to improve under the instruction of Troy. When the hired model, who is also staying in the house, ends up dead, Alleyn is called in. His mother played more of a role in this book and she is a fun character. I enjoy these books and characters. 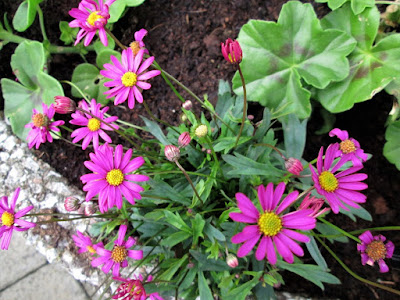 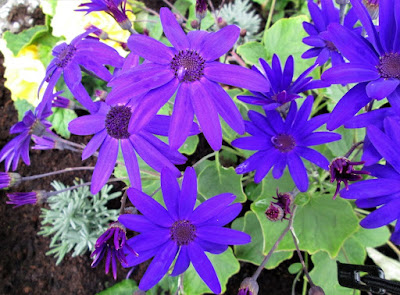 When I Walk Through That Door sounds like a very sadand emotional book. I love the flowers!

It was painful, but important.

I saw the flowers in a planter yesterday and they took my breath away--especially the deep purple ones :-)