Over the past few years, these have been popping up outside of petrol stations. 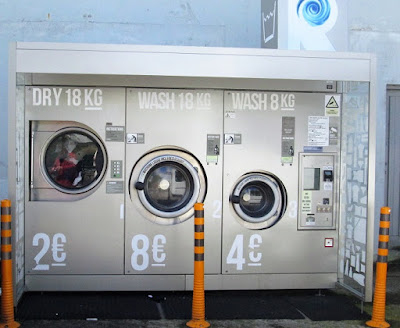 They may have laundromats in some parts of the country, but we haven't seen any in the places we've lived. They have launderettes, which seem to be places where people drop off laundry to have someone else take care of it, but I've not been inside one, so I'm not sure exactly how they work.

We've spent a lot of time over the years looking at rental properties on various websites and one thing we noticed pretty quickly was that they (almost) all have washing machines in them. These are small, under-counter machines, usually in the kitchen, but sometimes tucked away in a bathroom or other spot. There may or may not be a dryer. Again, this may be different in more densely populated areas, but I only have experience with small rural towns, both in terms of where we've lived and where we've looked.

We've lived in four different dwellings here. All have had washing machines and two have had dryers. We never used the dryers. All have had laundry racks--sometimes called a clothes horse or air dryer here. We were happy to discover that these air dryers were part of the furniture, small appliances, kitchenware, etc that comes with rental properties. We'd planned to buy one, so were glad when we didn't have to. We stopped using a dryer over 35 years ago, except for the times we were camping across the US and didn't have a place to hang clothes to dry. From looking at the suggested drying times on the front of these dryers, I'm glad I never felt the need to use them--they both suggested 3 hours of drying time for a load of cottons! This may be one reason why clotheslines are so popular here. Only one of the places we've lived has had no clothesline available, and I could have rigged one up if I'd wanted one. I didn't, because the rack was easier, especially when I consider the fact that me hanging out laundry seems to be a signal that it should rain. I love rain, but not on my drying laundry. As soon as I dash out to bring it in, the sun comes back out. I hang the stuff on the rack and walk away.

As we've ridden around on buses, I've seen a lot of clotheslines with metal roofs over them. Electricity is expensive here, so that may be one reason why clotheslines are so popular. And really, three hours of drying time for one small load would be another incentive to hang the clothes and leave them.

So people have washing machines in their homes, but they're small, so big bulky items won't fit. I guess that's where these machines come in handy. They may also be useful for tourists. They seemed to start popping up a couple of years ago. This one is in Ballyshannon and someone was using it when we were there. There's one at the petrol station on the outskirts of town here and also at a station on the edge of Donegal Town--the latter has two such set-ups. I don't recall ever seeing those in use, but maybe I've simply not been going by at the right time. It seems like a good thing to have available in the event that a large item needs to be laundered.

I've never lived in any state that didn't have public laundromats, and there is an "outside" one near me that has a roof over it but no walls. I've always had a washer and dryer but years ago I used to like hanging clothes on the line outside to dry in the summer, but . I have never had to dry even a huge load in my dryer for more than 40 min. Wonder why it takes so long there?

I'm told that the large outdoor ones like in the pic don't take long. But the ones we've had in a couple of the places we've lived are small, like the washing machines, and both gave suggested drying times of 180 minutes on the front. I don't know if it would really take that long since I never used them, but since they're small and not very powerful, it seems like that might be accurate, especially for something like towels.

I first wrote: we don't have public laundromats here. But after searching with the help of Google I have read we have them in The Netherlands to. It is called: wasserette.

I have a wasmachine and a dryer. No clotheslines.

It seems to me that many people are reverting to hanging the laundry on the clothesline outside and taking advantage of Mother Nature. It boggles the mind that in some municipalities here outdoor clothes lines are not permitted, because laundry flapping in the wind is deemed unsightly. Anything to avoid using electrical energy seems worthwhile to me.

Aritha--I think they probably have them in more urban areas, but there are only a few of those here. Housing is scarce in those areas and people sometimes live in small places without all the 'usual' amenities, so there would probably be a need for them. When we camped for a summer and when we lived in apartments (in the US) for the last few years before we moved to Ireland, we washed our clothes in laundromats and they were always busy. I like the word 'wasserette' :-)

David--I agree completely! I often chuckle when I think of the people I have known (in the US) who have told me they cannot have clotheslines because of neighbourhood covenants. That would never work here--I was surprised, but very pleased, to see the dedication to clotheslines here.