Climate Justice: Hope, Resilience and the Fight for a Sustainable Future by Mary Robinson

Since we're at the beginning of a new year and can have hope for what it will bring, I decided to begin my recap of the books I read in December with this one. 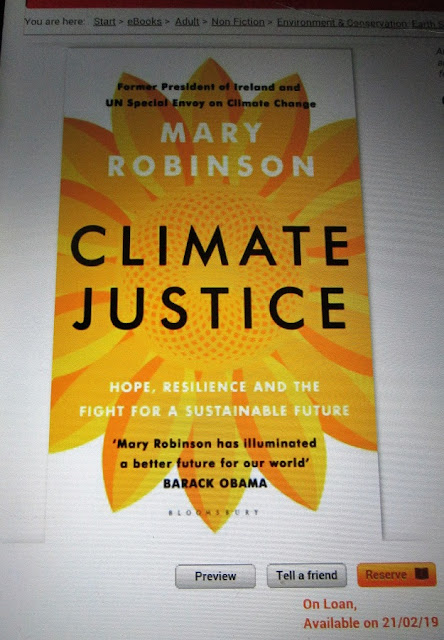 I found it in the e-book section of the library website.

First off, I think she made a good choice when she decided to present personal stories to illustrate what people are already facing (and have been for years) with regard to climate change and how they are responding in positive ways. It is an effective way to show what is going on--the personal is political, but often hearing the personal stories of individuals and seeing how they're affected makes the political aspects of an issue easier for some people to swallow. She includes a wide range of people in this book from all over the world and who have different ways of life, including a guy who has always worked in the fossil fuel industry and is now actively working to support change and fellow workers at the same time.

A review in The Guardian said this:
'The global initiative took Robinson to myriad countries, where she spoke to women who share two commonalities: they predominately work in the agriculture industry and their lives have been crippled by global warming. Their message remained the same: those least responsible for climate change are suffering from its most detrimental effects – namely, droughts, flash floods, rising sea levels and changing weather patterns, which in turn lead to unpredictable harvest seasons. Robinson thus concluded that climate change, human rights, justice, equality and individual empowerment are all inextricably linked. This is the central argument that holds this concise yet insightful and optimistic tome together.'

and this
'Robinson’s lucid, direct style works because it gives a voice to those who have taken it upon themselves to tackle Earth’s most pressing problems. The book’s central message is a mantra worth repeating: individual local action can grow into a global idea, producing positive change. Put simply: it’s up to us to take immediate action if we want to prevent our planet cooking itself to death in the coming decades.'

I should point out that she does not only talk to women involved in agriculture, as mentioned in the paragraph above. She speaks to women in the US south and far north who have had their lives impacted by climate change. She speaks to the Australian founder of 1 Million Women. The fossil fuel guy I mentioned above is Canadian. By presenting the stories of this diverse group of people along with the scientific findings and predictions about what climate change will do in an accessible manner, she makes the point that we're all going to be affected by this. Right now, some people are already paying a price for the lifestyles those of us in wealthy nations enjoy, but eventually, it will catch up with us, too.

As I was reading about how wealthier nations resist large changes because they say it will hurt the economy, an argument that has always seemed nonsensical to me, I was remembering that old commercial for Midas Brake Shops, I think it was--you can pay me now, or pay me later. Some people are already paying and some will pay later if we don't wake up. But we could choose to make changes. These changes might mean living a bit differently, but won't we have to do that anyway--and if we do nothing now, those changes will be forced upon us. If we started now, we might have more leeway to direct those changes a bit.

I like her optimism in this book--she truly does have hope. I think she is more optimistic than I am about how people will respond, but I have learned how to balance hope and what I know about how human cultures work, so even as my head tells me that we've left it for too long and the changes required will be too great and have to happen too quickly for them to embraced by change-resistant people, in my heart I hold out hope that we still have time to alter the trajectory we're on. Weird stuff happens, so we still have a chance. I make choices in my own life with that hope at the forefront.

I highly recommend this book.
Share
Posted by Shari Burke at 2.1.19