Yesterday, I made a batch of chocolate chunk raspberry muffins--yet another variation on the muffin recipe I have made in many different and delicious ways. 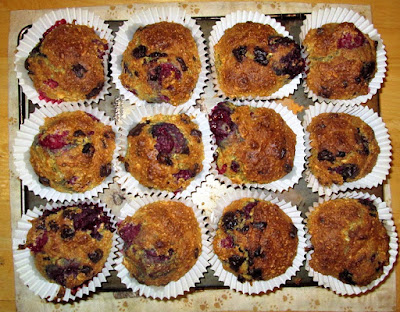 I made these the same way I made the orange cranberry version I posted about here with the following small changes:
Use milk instead of orange juice to soak the oats and add a teaspoon of vanilla (or almond) extract.

Use frozen raspberries instead of cranberries and chocolate chunks/chips (I used 100g, but add as many as you want) instead of nuts. Or use some nuts and some chocolate chips, if you prefer.

I don't think I've ever made these before, but I'll be making them again--they are yummy!

I was feeling a bit nostalgic when I looked at the post about the cranberry orange muffins, reading the bit about having snow and seeing my recently packed away snowman mug. We haven't seen any snow, but I did enjoy using my snowman mug during the festive season, sipping my tea while reading a couple of cosy Christmas mysteries that were in the mix for December.

Trouble in the Cotswolds by Rebecca Tope
I came across this book in a charity shop a few months ago and bought it, having read a few of the author’s other books, including one I found at the same charity shop that involved a Halloween storyline. This one takes place at Christmastime so I saved it for December and I’ll donate it back to the charity shop now I’ve read it. As it turned out, the days were even the same as this year, with Christmas Eve falling on a Monday, Christmas on a Tuesday. These are books that are enjoyable enough for me to pick one up when I come across it, but not something I would actively seek out. In this book, Thea, the housesitter and amateur detective, agrees to take care of a house over the holiday. things do not go smoothly, however, as Thea gets the flu, one neighbour is found dead, and another is a bit sinister. Happy holidays indeed!

The Santa Klaus Murder by Mavis Doriel Hay
I discovered a different book by this author in a local charity shop. I’d never heard of her, so looked her up. I found out that she was a Golden Age writer, but only wrote 3 mystery novels. Her passion was apparently rural handicrafts and she did a lot of research in that area and wrote several books. When I saw that one of her three mysteries was a Christmas cosy, I asked Bill to see if he could find a copy, which he did. The setting is pretty typical for such a book--big house, snow, family members and others who have uneasy relationships with one another thrown together for the holiday. The patriarch doesn’t make it through Christmas Day and based on the bits of angora fibre on his suit, it looks like Santa did it, shedding some of his fur trim in the process. I’ve packed this one away with the Christmas things and maybe I’ll revisit it in future.

It's pizza night tonight and my crust dough is in the bread machine. I'll have some soup cooking overnight in the slow cooker and tomorrow I'll make some jalapeno cheese bread to go with it. I like having the soup done when I come downstairs in the morning because that gives me a couple of days of heat and eat suppers, which in turn means more time to read or to stitch. I can chop veg and get everything in the slow cooker while I wait for the pizza to bake and then just turn it on later. There's no meat in it, so don't have to worry about keeping it cold.

Muffins sound, (and look) wonderful . ..
I am in my “cut back” mode now for a few weeks . . .
Too many sweet yummies made their way to my tummy in these past weeks!