We've gone directly from autumn to spring it seems, and the flowers continue to bloom. The planters are already colourful and there are plenty more colours on the way. 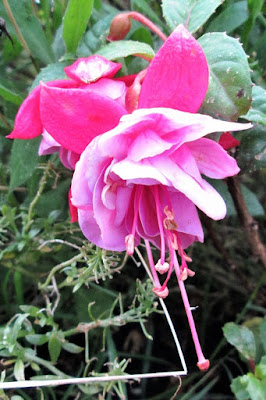 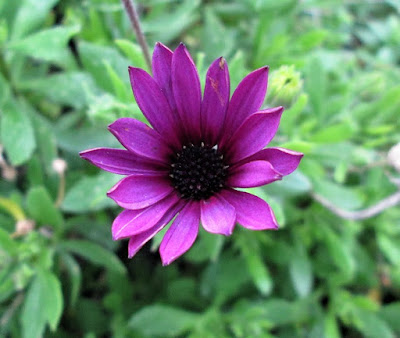 One of the books I read last month was all about flower gardening:
A Life in the Garden by Penelope Lively
In this book, the author, a keen gardener herself, describes her own gardens and what they’ve meant to her. She reflects on how her gardening life has changed as she moved to different places and has aged. She also discusses gardens in literature, how the authors wrote about them, and how they approached their own gardens. I am not a flower gardener and no doubt someone who knows flowers and/or gardens themselves would have gotten a lot more out of it than I did, but even so, I enjoyed this book a lot. I am always interested in where people’s passions come from and how they are experienced. Bill and I have done a few different life story projects with artists and quilters in which this formed part of my interview questions. I see gardening in the same way I see other creative pursuits and I am always intrigued by what grabs poeple and why, so from that angle, this book was a fun read.

The natural world also played a large part in this poetry collection that I read a year or two ago and wanted to revisit.
Silent in Finisterre by Jane Griffiths

No gardens played any more than a peripheral role in the Agatha Christie books I decided to take another look at:
Ordeal by Innocence by Agatha Christie
I read an article that I am pretty sure I found in a Lit Hub email about Agatha Christie--why she is so much more popular than other Golden Age authors, how her work stands the test of time, what her strengths are and where her weaknesses come to the fore. I have loved Christie since I was a teen and have memories of stocking up on her books before we’d go off on vacation, whch usually entailed a long car ride. Sometimes I was disappointed when I’d buy a book, thinking I hadn’t read it, only to discover that it was one I’d read with a different title. Back then, the books were either 79 or 99 cents--I’m not sure what accounted for the price difference. Now I have them all on my e-reader, so can carry them around without the bulk and weight. Anyway, in the article, the writer commented that many people think they know the stories as she wrote them, but what they actually remember are the TV versions. I know this is often true for me. I haven’t seen more recent dramatizations, but was quite taken with David Suchet’s portrayal of Poirot and Joan Hickson’s Miss Marple (she is Miss Marple--no one else comes close). There was a series of Miss Marples in the early 2000s, I guess, first with Geraldine McEwan and then with Julia McKenzie. In these, they changed storylines and endings, added Miss Marple to stories she did not appear in, and even combined her with Tuppence Beresford in one. These were quite different from the books, so I could see the guy’s point when I read that part of the article. In writing about the various plot twists in some of her better work, he mentioned this book. I vaguely recalled that it was one I saw in which Miss Marple had been dropped into the TV version even though she wasn’t in the book, but didn’t quite remember the book itself without the overlay of the TV version, so I decided to read it. The bare bones of the story are that on a dark and stormy night, someone appears at a big house and speaks to the family patriarch about his son, who had been convicted of the murder of his own mother and had died in prison. He had an alibi, but the person who could vouch for him never came forward, so he was convicted, became ill in prison, and died there. Enter the visitor, who has some news for the family. This news is not really welcome and he doesn’t get the response he expects. This is not a Poirot or a Marple.

Third Girl by Agatha Christie
This was another Christie mentioned in the article I read. Poirot is in this one and is called into service when a young woman comes to him, says she thinks she killed someone, then disappears.

The Hollow by Agatha Christie
It was apparently an Agatha Christie month. I think this book was also mentioned in the Lit Hub article I read and then it was also listed in someone’s blog post abot the books she’d read, so I figured I’d read it, too. This one is a Poirot. I like him, but I like Miss Marple better and through the years I have always wished there were more books with her in them and fewer with him. Oh well--apparently Christie herself loathed Poirot after a while, but her publishers wanted more of him, so she obliged.

I can't honestly say I am happy about this never-ending spring thing, but the flowers are pretty, so I'll just focus on those. I hope it's a lovely day in your part of the world!