We planned to do a quick run to Donegal Town today so we could go to the library and pick up the books that came in last week while we were away and the ones that came in this morning. We had about an hour to pick up some groceries and check the charity shop before the library re-opened after lunch. I found a small cone of navy blue wool and Bill spotted a basket with a few freebies. I picked up a necklace with a really nice pendant and some small beads. One of the cords is broken, but that's no matter, since I'm going to cut it apart anyway.

Then it was off the the library to collect my goodies. 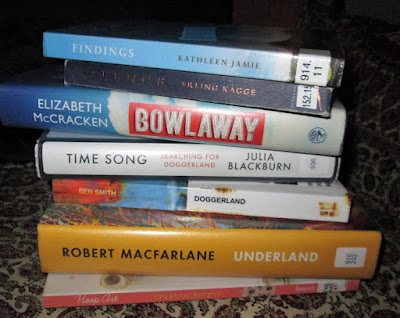 The librarian still had the table up with books that have been pulled from the library system. They've been selling them. In the past, he's said he is always glad to see the book people come in, because they can't resist. We don't disappoint him, since we usually leave with a few books, as we did today. I got a couple short story collections and a couple Irish history books. 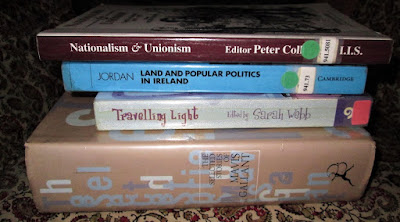 Then we got the bus. That's when things got weird. We were about 10 minutes from home when we stopped. The road was closed due to an accident. We saw an ambulance leaving the scene and another arriving. People started turning around and heading the other way. The bus driver was trying to figure out which way to go. This was complicated by the fact that one person needed to get off at the village just beyond the accident. This young man moved to the front with his phone, got a map, and navigated around the narrow back lanes. Others had the same idea and those lanes saw more traffic than they're used to! It was a little tricky when cars were coming the other way--these were 1-lane roads with grass growing in the middle, with occasional wider spots. Everyone was very considerate, though and pulled over when possible, or backed up until they could. We took a 45-minute detour through some lovely countryside. Best of all, the driver had on Highland Radio, a Donegal station, and on the news bulletin, they reported that there were no serious injuries in the accident. Hopefully the people who went in the ambulances will recover quickly.

Here are a few more of the books I read in May.
Gardening Women: Their Stories From 1600 To the Present by Catherine Horwood
I found this book in our local charity shop. It’s a really interesting history of women and gardening in its many aspects. She includes upper class gardens and various fashions through time, kitchen gardens, gardening advice for women, the enthusiasm people had for collecting flowers and other plants from all over the world and bringing/sending them back to Britain, the professionalisation of gardening as it pertained to women, and more.

The Library at the Edge of the World by Felicity Hayes-McCoy
A friend recommended this book to me after her librarian recommended it to her and she liked it. Hanna Casey, who grew up in a (fictional) village in Ireland, moved to London and married young. When she discovered her husband had been having an affair for years, she divorced him and moved back to Ireland with her teenage daughter, living with her widowed mother. When the story opens, the daughter is grown and living in France, but she comes to visit. Hanna is working as a librarian, but holds herself back from becoming too involved with any local people. She has a reoutation for being aloof and standoffish. Then she gest word that the branch library she runs is going to be closed. As the fight to save the library begins, people have to band together. Unlikely partnerships are formed, ideas show up, and new friendships are made. This was a good read and I found out that it’s a series, which is currently on book 5. My librarian is looking for the next one, which was supposed to be on the shelf, but was not immediately apparent when I was there looking for it. The third is a Christmas one, so I might wait a while to read that one. reading Christmas stuff during summer, my most difficult time of the year, depresses me. But come late September or October, I’ll be happy to jump in.

New and Selected Poems: Volume 2 by Mary Oliver
I regularly check the poetry offerings in the ebook section of the library website to see whether anything new has become available. I came across this and have enjoyed Mary Oliver’s poetry in the past (although I wasn’t keen on a collection of essays I read), so I checked it out.

Joyride to Jupiter by Nuala O’Connor
A collection of short stories that I found when scrolling through the e-book section of the library website. The title story, the first in the book, has a sucker-punch sort of ending. This is a nice collection of stories, some very short (a page or less) and some longer.

Woman’s Part: An Anthology of Short Fiction By and About Irishwomen 1890-1960 Janet Madden-Simpson, ed
Several months ago, I was looking for something else on the library website, when this title popped up. I am particularly interested in short stories written by women and Irish women’s writing, so I requested it. At the time, it was checked out, but due a couple of weeks later (30 January). Then it was renewed until 13 February. That’s where it sat until mid-May, when suddenly it was on its way. I’m glad I got to read it!

Well, that was quite an adventure. I can just picture that ride on the one lane roads. Several roads in the area I grew up in were one way. Glad no one was seriously injured.

I really like the story line in The Library At The Edge Of The World and have jotted that down on my "to read" list....when/if I ever have leisure time to read. lol

That sounds like a very eventful day! The Library at the Edge of the World and Joyride to Jupiter sound really good.

I really enjoyed The Library at the Edge of the World--the second in the series seems to have been misplaced at my library, so I'll request it from a different one. Joyride to Jupiter wasn't one I'd heard of before seeing it on the library site, but I was glad I found it! :-)

I hope you get some reading time, Diana--your list must be getting looooong--LOL