A Weekend in Doggerland: Fiction, Non-Fiction, and Beautiful Writing

A few weeks ago, I was listening to an episode of the Open Book Podcast from BBC Radio 4. The show opened with two authors who had written books about Doggerland, a now submerged area of land that connects England to mainland Europe. One book is a work of speculative fiction and one is non-fiction; both have things to say about climate change, as you'd expect. Before the segment had ended, I had looked them both up and requested them from the library. I picked them up last week and happily spent the weekend with them, finishing the non-fiction book this afternoon.

Time Song: Searching for Doggerland by Julia Blackburn
This book is an interesting journey with the author as she goes in search of information about Doggerland. The journey has added poignancy because her husband had recently died. Since not much is known about Doggerland, her scope is wider than that alone and encompasses ideas about how people might have lived there before it was submerged. She speaks to experts about the area, archaeologists, anthropologists and enthusiasts. She goes on field trips with some of these people and with friends. She observes and muses. She reads about the lives of hunter-gatherers in different parts of the world at different times, often creating poems, which she calls ‘Time Songs’ that provide a synopsis of what she has read. The book includes artwork created by a longtime friend. Rather than a linear narrative, the book is almost like a record of her process as she learns more--she tells us what she is doing, who she talked to, what she experienced, what people said to her, how they reacted to her and what thoughts she has in the process. She takes the reader along with her as she searches for Doggerland. This is a very fine book and I am so glad I read it. 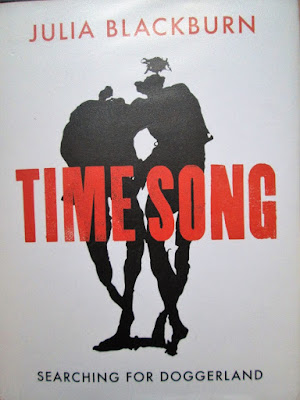 The cover is a picture of the flattened bog bodies of a couple that were found in 1904 by bog cutters. The author says, ‘A policeman was summoned and he rolled them together as you might a carpet and tied them on the back of his bicycle and took them (into) the town, where they ended up in the local museum. Whenever I look at them I seem to be looking at me and my husband walking through a landscape,  lost in conversation or in silence, our walk continuing in spite of time and the fact of death.’ (p 280)

Absence plays a big role in this book, as the author's husband had died not that long before she embarked on this project. At one point, she says she remembers some of the abundant wildlife she used to see as a child and tries not to notice that the populations of these creatures is diminishing, because it makes her sad. But she recognizes that we have no choice but to accept this. In another section of the book, she is comforted by the fact that the earth will go on, with or without us. I also find comfort in this thought, when I consider my own feelings of grief and sadness about our destruction of our beautiful home. 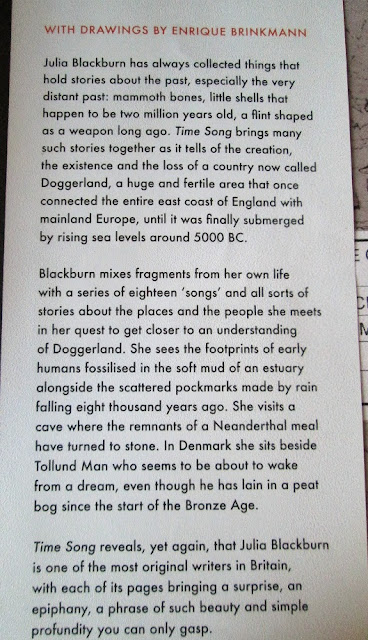 Before I started Time Song yesterday, I read
Doggerland by Ben Smith
I started this book one night, then picked it up again the following afternoon, thinking I’d read a bit more. I looked up two hours later as I closed the back cover. I hadn’t moved during that time, except to turn the pages. This is a wonderful book.

Boy and Old Man live on a rig in a wind farm in the North Sea. Land is only a memory. Boy is there because his father had taken a job on the rig, but had tried to escape at some point and was never heard from again. Because of the father’s contract, The Corporation, which seems to be in charge of everything, sent the boy to take his place. We never learn what life is like on whatever land remains. The book takes place completely on the sea. Old Man goes out and tries to fish up artifacts from that time. Boy wants to fix things, which is his job, but Old Man is more lackadaisical and takes parts from the turbines and saves them for when Pilot comes to bring supplies. He can trade things for stuff he wants. A comment by Pilot makes Boy determined to find out what happened to his father. Whereas before, he had asked Old Man and was frustrated by his lack of answers, Pilot’s comments spur him to action and the story unfolds.

Interspersed through the narrative are descriptions of the prehistorical land mass that is Doggerland. I read a couple of reviews that argued that these were misplaced and added nothing to the book. I could not disagree more. I loved them. The writing was gorgeous (the author is also a poet and this is his first novel) and in my opinion, these short interludes enhanced the book a great deal. For one thing, they reminded me that we have a sense of importance about our place on the planet, but we’re really a blip. Mother Earth was doing her stuff well before we evolved and will continue to do so long after we’re extinct. Also, in the story, there were times it seemed that Boy and Old Man were doing tasks that were pointless. For example, as they cannibalized parts from the turbines, the output was going down, down, down, yet no one from The Corporation seemed to notice or care. I think the sections that described Doggerland as it arose from the ice and then was submerged again thousands of years later, reinforced that, in a way. The fields (as the wind farm is called in the book) are there now, but the sea is gradually destroying them and they will not be there forever. At some point, the sea will reclaim them, too, no matter what Old Man, Boy, and anyone else does.

I'm not sure what I will choose to read next, but for now, I'll just keep my head in Doggerland and Julia Blackburn's gorgeous writing for a little while longer.

I've never heard of those books. I hope you enjoy them!

I loved them both! So glad I heard about them! :-)