Post-Apocalyptic Ireland and Other Writing By and About Irish Women

I am a fan of some kinds of dystopian or post-apocalyptic novels, although I am kind of picky when it comes to such things. If a the story is nothing more than a vehicle for brutal violence and gore, then I'm not interested. However, I am extremely interested in culture change and how people respond to this, as well as how people respond when they find themselves culture-shocked and forced to adapt. Years ago, when we still had a TV, I used to love shows involving the latter and I was a huge Northern Exposure fan. In fact, when I was teaching Intro to Anthropology at the university in Fairbanks, I used the first episode of that show early on in each semester as a way to introduce some of the basic concepts of anthropology. It worked well, because they found it very funny to watch the ways in which Alaskan culture was depicted and it provided an interesting and amusing way for them to quickly understand the basics.

Since a sudden catastrophe also throws people out of their normal comfort zone and into unknown territory, I don't see these kinds of dystopian stories as that much different, except that they're usually not very funny. The biggest thing in a dystopia is that--at least at first--culture has broken down. Maybe it's not so much culture shock as culture-less shock. All the norms and societal institutions are gone, so can no longer be relied upon to guide people or give them a framework to either live within or push against, leaving people adrift. How they adapt to this and begin to build new cultures and possibly new institutions interests me greatly and it is the books that develop that theme which I enjoy so much. Margaret Atwood's Madaddam trilogy did this quite well. I did not expect to like those books, but ended up devouring them.

Oddly enough, I suppose, I do not like any of the Star Trek or Star wars kinds of things. I was bored to tears when I tried to read Harry Potter, and sci fi is not my thing. I am possibly the only person ever to darken an anthropology department who was not a fan of these things, but there's not much I can do about it. I have tried and tried to find a way in with regards to those genres and I have failed miserably. I decided there are too many books I want to read in this limited life span, so I give up on the things that I don't engage with.

With all that in mind, I was very excited to read about a dystopian novel that is set in Ireland--Irish dystopia, who knew? I wasted no time in finding it on the library website and putting in my request. 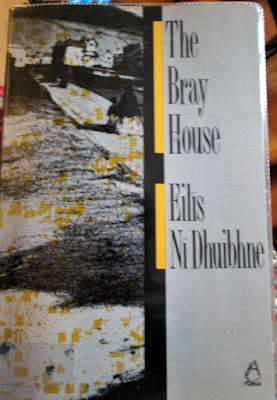 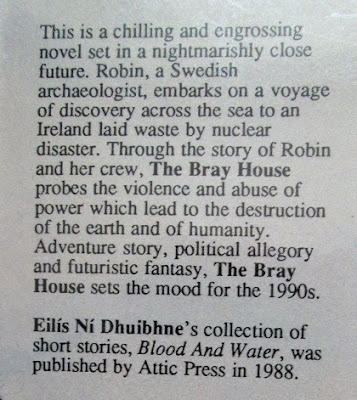 The book was published in 1990 and one of the fun things about it was seeing what the author thought Ireland would be like in the early 2000s (an exact year is never specified, but always written as 20--). She did not anticipate the euro or the Celtic Tiger. It was interesting to read the attitudes and relationship between Britain and Ireland at this time, as Brexit issues are dominating the headlines. Climate change is a big part of the book and it is the attempt to replace fossil fuels with nuclear power on the part of the British that leads to the catastrophe in which Ireland and much of the rest of Europe and elsewhere is collateral damage.

While the book does contrast Irish and Swedish cultures, Robin, the extremely unlikable narrator, is the focus of the story. Sweden, has escaped the nuclear disaster through luck and good planning, so after a bit of time in shelters, they go back to near-normal, albeit with some changes due to the fact that there are no others left in their region, as far as they know, and there are things they can no longer get from elsewhere. Coffee, for example, is no longer available. Robin puts together a small crew, taking the only people she can get, and they set off. Her expectations are unrealistic throughout and in every way possible. She alienates people easily, has an exaggerated sense of her own superiority, the importance of the mission, and the response she expects when she returns home. Needless to say, things do not go smoothly. The book was not what I expected, but I enjoyed it nonetheless.

I wondered if the author had any tie to Sweden, so I looked her up and found out that she was married to a Swedish folklorist until his death a few years ago and has a good grasp on Swedish culture. I've also read a couple of her short story collections and liked them as well.

The Poolbeg Book of Irish Ghost Stories, David Marcus, ed
I came across this title when I searched for Dorothy Macardle, one of the authors discussed in the  book, A History of Modern Irish Women’s Literature. One of her stories is included in this collection as is one by Mrs J H Riddell (sometimes known as Charlotte). I enjoyed this collection a lot. Many of the stories involved people who actually lived and have become legends here. I ended up doing a bit of googling after a few of the stories, trying to get a wee bit of information about them. My knowledge of Irish history is sadly lacking. Some of these stories reminded me that I really should remedy that!

The Uninvited by Dorothy Macardle
This book was originally published with the title, Uneasy Freehold. There was apparently a film adaptation titled The Uninvited. The author was discussed in the modern Irish women’s literature book Bill got me, and I went looking for her books on the library website. In reading the introduction, I learned that she has a sequel to this book, so I went and requested that. While I was at it, I put a hold on her collection of short stories, too. In this book, the narrator is Roderick Fitzgerald, who is sending his friend a written account of some strange experiences he, his sister, and some of their friends had in a house called Cliff’s End. Roddy and his sister, Pamela, came across the house quite by accident one day when they were driving along the Devon coast. They’d come to look at a different house, which was unacceptable, and when on their way back to London, they went down a road on a whim and found the house they fell in love with and decided to buy. They were warned that strange things went on there, but they bought it anyway. What are those strange noises and where is the cold coming from? Roddy and Pamela, with some help from their friends, decide to find out.

Mothers and the myths surrounding motherhood are an underlying theme of the book as is the tendency at the time of writing (and possibly continuing into the present) of seeing Ireland as an idolized mother figure. While the story is set in Devon, Ireland features prominently as ‘home.’ This book was written when Ireland was a very young country--published in 1942, so less than 20 years since (most of) Ireland won independence and romantic feelings would have been high.

After I read this book and was reading some of what was written about it, I discovered that in addition to the film, there was at least one radio adaptation, which I found on youtube. The story was squished into 26 minutes or so and necessarily left out most of the characters that were in the book and much of the underlying themes were missing, but it was a pleasant half hour.

A History of Modern Irish Women’s Literature, edited by Heather Ingman and Clíona Ó Gallchoir
I could never keep all of the books I read--I'd have no room in which to live--so I use the library and pick up books at charity shops, knowing that when I am done, I will re-donate them, with few exceptions. Once in a while though, I come across a book that I know I want to keep (since I almost never re-read novels, these are nonfiction or short story collections) Our first stop is Kenny's, an indie book shop and art gallery in Galway. When I read about this book, then heard an interview with the editors, I knew that it was one I wanted. Bill made a note of it and one day shortly thereafter, the postman knocked on the door and surprised me with a parcel from Kenny's. 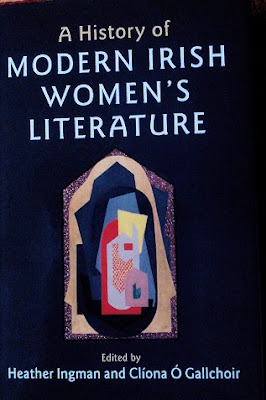 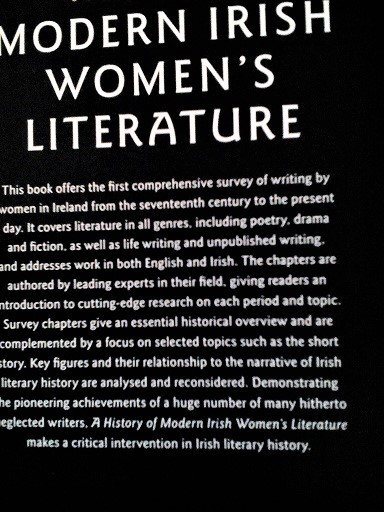 What a great book! I read it a little at a time, stopping to check Project Gutenberg for some of the older authors. I found several and downloaded a bunch of those books. When I got to more modern times, I started requesting from the library. Once I read the books, I went back and looked up the authors in the index to re-read what had been written about them. I am thrilled to have this book. I learned a lot and expect to be referring back to it as time goes on. And I love the cover art, too!

The book has started me on a path of discovery, which makes me very happy indeed! I hope you are happily engrossed in something that brings you joy as well!