Well, somehow January passed by in a bit of a blur. I spent most of the month with art/craft of various kinds--although not making any-- and evaluating my own creative practice. I suppose it was a bit of a continuation of what I was doing in the days leading up to the new year. It was good to have a focus, since I must admit I was feeling a bit glum at the increasing daylight and the lack of anything resembling winter. I read about art and artists (writers, painters, sculptors, potters, etc), watched videos of them working and/or discussing their work, found books by writers at Project Gutenberg and the library, which often led to other books that are on the way, and listened to podcasts involving artists in conversation with other artists, as well as some about books and other things. Last night, I listened to an episode of In Our Time from BBC Radio 4 about mathematician Emmy Noether, who has never gotten the recognition she apparently deserves. It was fascinating. I did a little bit of mindless stitching while I listened to some of the podcasts, but I was in a bit of a funk and feeling sort of adrift, so wasn't really feeling very creative myself. That is starting to change and I'm grateful for that. I also appreciate being able to vicariously connect with creativity, even if I could not access my own very well for a time.

We've had a few days of winter-ish weather this week. It got cold, although not extremely so, and we had a wee bit of snow, which you can barely see falling (the white dots visible in front of the green). The day after this, we woke up to a dusting. 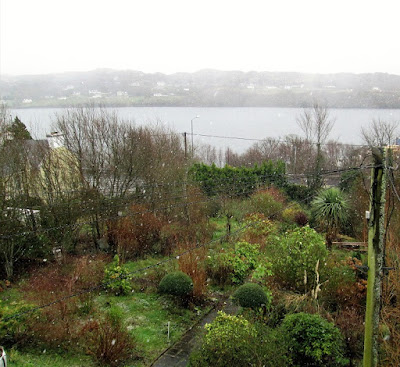 It's supposed to get warm again next week. Yesterday was St Brigid's Day, which coincides with Imbolc, traditionally the first day of spring. Songs about spring were played on the radio. I guess it gave people hope on one of the coldest days of the year!

As always, my month was filled with books, starting with a bit of 'weird science.'
The Re-Origin of Species: A Second Chance for Extinct Animals by Torill Kornfeldt with translation by Fiona Graham
I came across this book while scrolling through the e-book section of the library website. I had no idea there were so many people working to ‘bring back’ extinct species. These include mammoths, a kind of ibex and many others. These scientists recognize that even if they are ever successful, these will not actually be the same species that has gone extinct, but a new hybrid. Of course, there are all sorts of ethical questions surrounding these endeavors, for which the scientists have their own answers, whether convincing to outsiders or not. The author does investigate her own responses to the work these scientists are doing and comments on her own misgivings as well as what seems plausible or not. Because she has been a science journalist for many years, she asks good questions when she talks to these scientists and visits their labs and field sites. I had not heard of this book, but I’m glad I cam across it--lots of food for thought here. After I read it, I read this Guardian review, which is here, if you want to know more about the work.

There was some lighter fare:
The Uninhabited House by Charlotte Riddell
This author (also known as Mrs J.H. Riddell) was mentioned in a book that Bill got me called A History of Modern Irish Women’s Literature. I went looking for her in Project Gutenberg and found this, so downloaded it and put it on my e-reader. It made for excellent bus reading. The story revolves around a house, a law office, and the woman who is trying to let the house. She is the guardian of her orphaned niece. The woman herself is always in need of money, in part because she puts on airs and in part because no one will stay in the house because of the strange happenings that grate on nerves and frighten people into fleeing. The story is narrated by a clerk in the law office, so we learn a bit of his history along with the history of the house, the woman, and her niece. I was surprised at how funny this book was. Riddell has a sort of dry wit and some of the dialogue was quite amusing.

And a bit of crazy politics, complete with a short discussion of sado-populism:
Heroic Failure: Brexit and the Politics of Pain by Fintan O’Toole
I came across this title, written by a well-respected Irish journalist, while scrolling through the e-book section of the library website. Since I have read some of O’Toole’s earlier work and found it informative, helpful, and interesting, I decided to read this. It did not disappoint. I learned a lot about English culture and attitudes towards themselves, their colonial past, the Germans, Europe, and more. O’Toole argues that Brexit is largely an English thing. Indded, it is the case that, if you look at the numbers, it was England and Wales that voted to leave the EU. In this book, his focus is the particularly English attitudes that led so many people to vote yes, even though they would be hurt the most if this actually happens. He takes examples from English literature and movies to show how they have reflected certain ways of looking at the world through time, tying them into historical events. He is particularly interested in the post WWII era in this regard and it was here that I learned the most. I had no idea the English were so paranoid about the Germans even now and how many English people consider the entire EU project to be a German plot to take over all of Europe. After I read this, I started noticing how certain UK politicians would talk about Brexit in terms of Germany. There was even a journalist who asked whether it was really the EU people negotiating or whether they were being dictated to by Angela Merkel. I am not sure if these people are pandering to a certain segment of the population or if they really believe this stuff.

In terms of people voting in ways that will hurt them in the end, he references Timothy Snyder’s idea of sadopopulism, a phenomenon we can see at work in many places--the  idea that yeah, if I vote this way, I’ll experience painful repercussions, but other people that I don’t like will also feel pain and that will make me happy--watching other people’s pain is the reward they get. I read this a few days after I read about a woman in the US who voted for and supported the current unfortunate president, but was not happy with him because he’s not hurting the people he should be hurting, in her view. Could there be a better example? It also brought to mind an opinion piece I read a while back in The Atlantic, which is, in my opinion, spot-on. The cruelty is the point.

The title of the book comes from an idea that in the past, when they were a powerful colonial nation, the Brits could afford to--and did--make heroes out of people who had failed. The failure was not a big deal, because the power they had as a nation was not threatened. Some have yet to come to terms with the fact that they are no longer all that powerful and failure is just failure--and it will have serious repercussions. He talks about some of the main players in the Brexit debate and how they are elites playing games with those who are not elite and who, sadly, believed them. This was a game for people who regularly lied and continue to do so, but who will be largely insulated from the chaos and destruction they have helped to create. In fact, one prominent Brexiteer continues to engage in arrogant rhetoric about how great Brexit will be for the UK and people will be begging to trade with them and all of that. When the heads of supermarket chains recently sent a letter to the government warning that they would have difficulty keep shelves stocked in the event of a no-deal Brexit, this guy was one who dismissed them as scaremongerers (because, of course, he knows better than anyone who actually works in the field), as though they had no idea what they’re talking about. This same guy is involved in a company that is helping other companies and individuals move their resources out of the UK to Dublin and other places within the EU to protect themselves from Brexit. So he’s encouraging one thing while making money off of the future pain people will experience if he gets his way. Charming fellow.

After this, the library books started coming in--more about those in future posts.

I hope January was a good month for you and that February is even better. Happy Imbolc!
Share
Posted by Shari Burke at 2.2.19

Love the garden picture! It s good to evaluate your own creative practice. You know the quote? In winter, I plot and plan, in spring, I move.