I've been trying to replenish my supply of yeast for months, to no avail. In Moville, I could get it at the Organic Farm Shop, which was about a minute away from our house. I'd pick up a couple of bags and it lasted for a year. We meant to pick up a couple more before we left, but forgot and the amount I have has been dwindling. The local grocery store only carries a box of yeast with 8 individual packets inside, which is too little yeast and too much packaging. Lidl and Aldi don't have yeast at all. I tried the SuperValu in Donegal Town, which only offered the same box as the one here. I made a mental note to check when we were in Ballina, so I tried the grocery store there--same kind of box, but different brand. I found the health food store and asked there--only yeast they have is nutritional yeast. Who knew something like yeast would be so hard to find?

Fortunately for me, Bill takes such situations as a challenge and he went clicking around to find somewhere to buy yeast without a landfill's worth of plastic pouches and cardboard. He discovered Evergreen Healthfoods--a shop in Galway which also has an online shop. He sent me the link. I started clicking around. I found more stuff that I cannot find here. I started a tally to see if it would be worth placing an order--delivery is free if you spend over €30 and I didn't want to buy a package of yeast for €1.80 and pay €5 to ship it. But between the items I cannot get here, some of which were on sale, and the couple of things I wanted to try, minus 10% off the entire order because it's their 10th birthday, my total came to €30.67 😊

Bill placed the order over the weekend and it arrived this afternoon. I am well pleased! 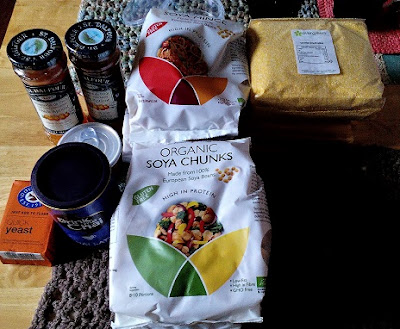 The order was packed very well in a box that was just the right size to fit everything without having to stuff it with excess packing material (and which also worked perfectly as an under-the-bed storage box). The two bottles of jam were wrapped in bubble wrap, but not an excessive amount. Other than that, things like the maizemeal were wrapped in brown paper.

I was quite happy to see the soya mince and soya chunks while I was scrolling through the site. I used to get blocks of tofu from Andrew, the veg man who came to Moville on Tuesdays, but that's another thing I can't get here, unless I get a small block of pressed smoked tofu at a shop in Donegal Town or a jar of water with a small blob of tofu floating in it. This is essentially dehydrated tofu, so even easier to use than Andrew's, and it's organic (so GMO-free) and made from European soy. Since we have not eaten beef in decades, and have decided to stop eating chicken and the occasional pork, this will come in handy. I'm also very pleased to get the coarse maizemeal to use for polenta and corn muffins. We can get the all-fruit jam at our local shop, but not apricot. They didn't have the orange coconut tea I wanted to try, so I got some tomato pepper pate instead. I'm looking forward to trying the chocolate chai. I got two of most things, but one each of the things I wanted to try out and the yeast. I'm going to do some experimenting with sourdough, so might not have as much need for yeast as has been the case. We'll see how it goes. That pouch will last me 6 months once I open it and I still have some from the batch I bought earlier this year. I won't need to buy yeast from Evergreen for a while now, but I'm so glad Bill found them while looking for it! I wouldn't hesitate to buy from them again and to encourage that, they gave us a voucher code for a discount on our next order. Maybe they'll have the orange coconut tea by then! I hope so--sounds so good! And now, I think I'll make myself a cup of chocolate chai.

I hope there are a few minutes in your day for some relaxation and a nice hot (or cold) beverage!
Share
Posted by Shari Burke at 24.10.18

How wonderful that you found the yeast. That is one of my biggest pet peeves the overuse of packing materials when I purchase something. I can order something as small as a 3 oz bottle of real vanilla and it comes in a 10x12 box full of plastic wrap. Seriously?

Well, glad you got some new items to try and have fun making bread. xo Diana

Glad you found what you Need.
As a vegetarian for 26 years, I have a difficult time substituting in recipes. Have discovered delicious chili and even experiment with meatless beef stew. You are living the dream there and I love your blog and pictures!!!

Happy you’ve found this place.
My Guy, “Mister Irish,” is a great scout/finder too.
I say the word, he is on a mission.
And usually has good luck.
Happy you found the yeast, I was ready to send some out to you!