Along the River Moy

I saved the best part of Ballina for the last post about our little trip there. It's definitely the river. It runs right through town and they seem to have done a good job of making it a community focal point. There are two bridges for vehicular traffic--both allow for one-way traffic only. Where the roads run alongside the river, there are footpaths (sidewalks) with lots of benches along the way, where people can stop, sit, and enjoy the river. One of these leads to the town park, which has a playground for the kids. On one side of the river, heading south, there is no road, but there is a cycle/pedestrian path that runs right along the river. It's not long before you're out in more rural surroundings. In town, there are steps leading down to cobblestones riverside areas, where people can fish and, I suppose, swim. On the path, there are steps or footpaths leading to smallish platforms for fishing, with the proper licence (license). One day, we spent a good deal of time by the river, walking one way, then turning back into town.


Later, we set off in the opposite direction, first crossing the river, where we sat for a time just listening to the birds and the rushing of the river near the salmon weir a short distance from us. I did a short video right near the weir just to get the sound--it's here. Then we walked over the pedestrian bridge and headed south on the walking/cycling path. 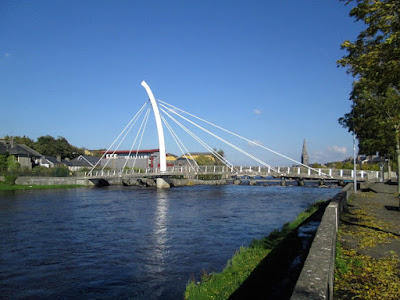 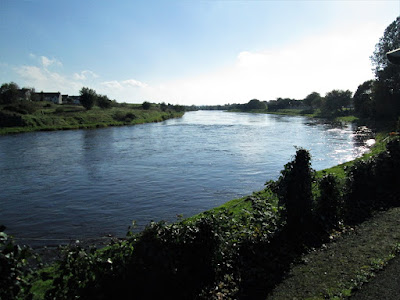 We enjoyed our few days in Ballina. We both agreed that we would go back there sometime, as there are at least a couple more walks that we didn't get to. But we both know that there are also many other places in this beautiful country that we've not yet seen, so whether we would go back to Ballina before heading off to walk around someplace where we've not yet been remains to be seen!

Love your pictures and your writing!!!

I think I will use the English version of “picking up!”
I have never been able to understand why
there would be those who do not, “pick up!”

And it boggles my mind to think of those
who have fenced in spaces for their doggies,
and let them out to do their business . . .
Do they EVER “pick up!”

On a more cheery note . . .
I loved your Ballina pictures . . .
So many places to see . . .
I think of our going back to our usual Ireland places
but there are so many other villages, places, sites to see!

How will we ever fit it all in!!