I made a slaw/salad base with some shredded cabbage and carrot, diced sweet red pepper, basil, oregano, and balsamic vinaigrette. Veg man has been having these small pointy heads of cabbage and I love them, so I've been getting one each week. Last week I did not see them until we'd paid and were walking away. I chose one and went back up to his counter to pay him for it and he told me to just take it. This week I spotted them in time. I made a nice big container of the slaw and can add stuff to it for lunches for the next few days. Today I added a few cubes of garlic and chive cheddar, black pepper cheddar, and a crumbly plain cheddar, some sliced cucumber, and cherry tomatoes. Yum!

After we ate lunch and I finished my library book, we went off to the shop on the edge of town to pick up some strong wholemeal flour and a few other things. It felt cold when we walked outside and the wind hit. Then we turned the corner and the sun came out and it felt hot. The colour of the water was interesting--a sort of grey-green, which did not get captured by this picture. 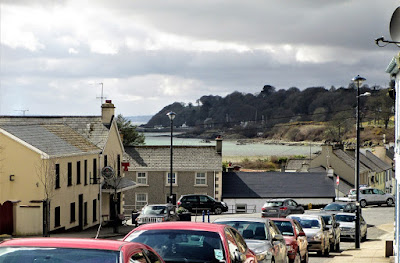 There was something about the way the light was interacting with the sun, clouds, and water that made it striking to me when I first saw it.

By the time we got home, it was chilly again--someone commented on how biting the wind is today and that's a good way to put it. We put the groceries in the kitchen and grabbed the stuff going back to the library. I put the kettle on so that when I got back I'd have a head start on my cuppa! Of course, the library was roasting so by the time I got out of there with my loot, I was way too warm. I made my cuppa anyway.


We have leftover soup to have for supper tonight. I made a quick veggie soup with a little chicken in it last night and there's enough left for tonight. I used a bag of the green beans Bill grew in his garden last year--now I have one left in the freezer. 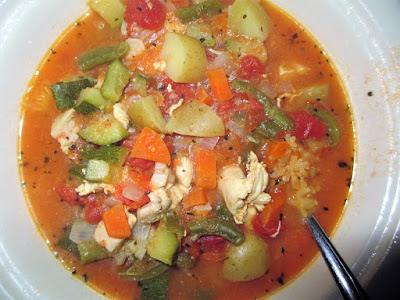 So it's a soup and a salad kind of day. I had the cold salad earlier today when I was chilly. Hopefully by the time I heat up the soup I will have cooled off again. Maybe I should open a window.
Share
Posted by Shari Burke at 4.4.18