The other day, I did the latter. I'd been meaning to try out the Romanian cord for a while and just never got around to it. When the crochet calendar page the other day showed a project using one, I figured that was as good a time as any to try out that method.

I have a small bell that a friend sent me a few months ago. It has a lotus on one side and a Buddha on the other. It was a key chain, but since I rarely have my keys out, if I used it like that, I would never see it. She sent Bill one with a Celtic knot that he has on his backpack, but I didn't want to do that, either. I kept my bell on the table next to the couch where I could see it and enjoy it.

Thich Nhat Hanh, the Buddhist monk, often spoke of the 'mindfulness bell' and even suggested that people set up a bell sound on their computer or use the telephone ring as a mindfulness bell. The point was that when you heard the sound, you would pause for just a second or two and be reminded to be mindful. I would hear my bell when I would pick it up or bump it and even just seeing it sitting there made me pause for a second or two. When I decided to try making a Romanian cord, I figured that if I liked it, I would use it for my bell. So, the other night, I grabbed some purple yarn and my pouch of hooks, and sat upstairs crocheting a cord while listening to a dharma talk. I made it long enough to fit over my head so I could slide the bell on as a pendant and either hang it or wear it. 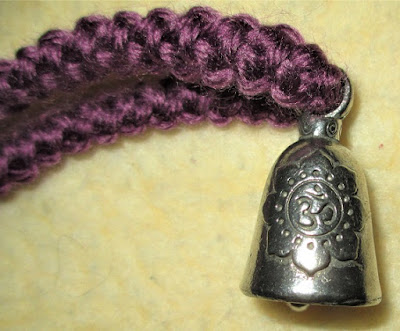 I did like the way the cord came out and I've been wearing my bell for a few days now. It does not make a loud sound, just a small tinkling now and again when I move the right way. This is my mindfulness bell.

The Romanian cord is very easy to make and the process is quite meditative--just making one single crochet, turning and making another in a particular spot. There's a good video here that illustrates how--it's about 6 minutes long. I can see all sorts of uses for this and it is great for using scraps. The end result gives a nice edge with loops that can be worked into for needle lace of various sorts, crochet, knitting, sewing, etc. Cords could be used as embellishments as well--just make a long one, lay it out in whatever design you like, and couch it to a garment, quilt, wall hanging, etc. I might be starting another, longer cord tonight for a different use. I'll see what I feel like later.

I also recently experimented and made something that is rarely seen, but extremely useful. I'll save that for another day.

I hope you're having a peaceful and pleasant day.

Hello Shari, Thank you for your nice comment on my blog. What a great idea with the bell your friend gifted you. A lot of outdoor cats wear a tiny bell on their collar so they are not able to sneak up on the birds. I love to hear the sound. The old log cabin book I found yesterday had a braided piece of yarn as a bookmark; nothing fancy, but it did remind me of you and your nice surprise of gifting bookmarks.
Have a nice weekend.