The Humans by Matt Haig

I heard about this book a couple of weeks ago while listening to an episode of A Good Read on BBC Radio 4 when it was the pick of one of the guests, Dr Kevin Fong. 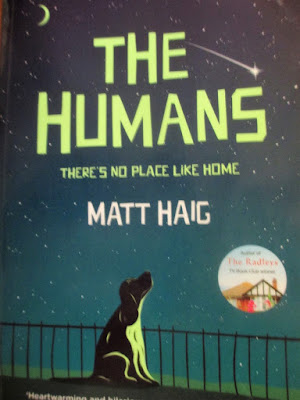 After the panel was finished discussing it, I clicked over to the library website, found it, and requested it. It arrived Friday and I read it today. I have to say that I thoroughly enjoyed this book. I was a few pages in when I laughed for the first time and there were more laughs to follow. I love culture shock sorts of books where the storyline is all about a person or people being put into an alien environment and having to learn how to function. Perhaps I enjoy such stories so much because this is how I have lived most of my life--always watching what is going on around me from the fringes and trying to figure it out. In any case, with regard to this book, 'alien environment' is exactly what the setting is. It is definitely an 'anthropologist from Mars' sort of book.

Professor Andrew Martin is a very highly regarded mathematician, but is a bit rubbish at being a husband to Isobel and father to Gulliver. One day, he comes to the moment he has worked towards and sacrificed for throughout his career. He has solved the Riemann hypothesis. Unbeknownst to the brilliant mathematician, there are beings from a galaxy far, far away who do not want mere human earthlings to have this knowledge, so Professor Martin is replaced. His replacement looks like him and attempts to assume his identity in order to carry out the tasks for which he was sent. Everything is foreign to him and he has to learn fast. To say much more would be to take away some of the fun of reading the book and experiencing his confusion and insights into human experience as he goes along, so I will just say that it is not all comedic and he does come to some understandings about the human condition along the way. In the acknowledgements, the author said the idea of the story came to him during a time of severe anxiety in his life when he was having panic attacks every time he left his house.

The book takes the form of a narrative meant to be read by the people the alien being has left behind and at the very start he tells them that, 'For those that don't know, a human is a bipedal life form of mid-range intelligence, living a largely deluded existence on a small waterlogged planet in a very lonely corner of the universe.' (p.ix)

I am very glad someone picked this book as their good read for the show, happy the library had it, and very pleased to have read it.