We've just returned from a lovely Thanksgiving gathering at a friend's house. We met some new people, had fun conversations, and ate delicious food. We are stuffed! Our hosts went to a lot of time and trouble to create the feast and the guests all added something to the table. The food and the company were so appreciated.

My contribution was dessert and a bean/veggie salad with pesto.
I made a butterscotch custard--I am calling it custard, but I am not sure that it is technically that, since it has no egg. I would have called it pudding a few years ago, but that means something different here, so custard it is! 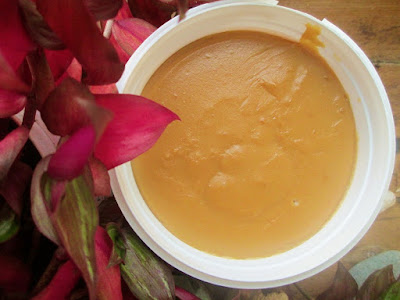 I made that to go on top of the apple crisp/crumble I made, since I could not get ice cream--no room in the wee freezer compartment of our little fridge. 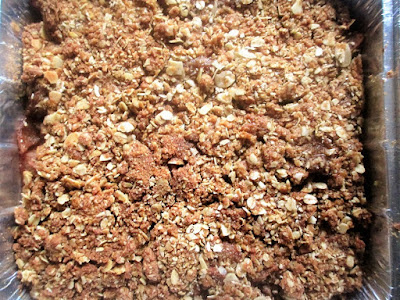 I cut the sugar way down on both the custard and the crisp/crumble. It was a bit of an experiment with the custard/pudding, so rather than wing it and hope for the best on the day I made a test batch last week. We have gotten out of the habit of eating really sweet things, except for a small bit of chocolate now and again, so the pudding that I used to make is now way too sweet. To make this, I placed 4 tablespoons of flour in a saucepan with 4 tablespoons of dark brown sugar and whisked them together before adding about 3 1/2 cups of milk. You could use cornstarch instead of flour and that should work--just use half the amount. I prefer plain flour for thickening--cornstarch doesn't hold up well in leftovers, in my experience. Anyway, cook the milk mixture over medium heat, whisking constantly until mixture starts to thicken. When it starts to bubble, keep whisking for another minute or two, remove from heat, add a bit of butter if you want and 1/2 teaspoon of extract if you want flavouring. Last week I added some almond extract and used a lighter sugar (you can also use white sugar if you do not want a butterscotch flavour). It will thicken further as it cools.

The salad was another bit of improv, but quick to make and one I will make again. Had it cold today, but it would also be good heated up and used to top a baked potato or some brown rice. 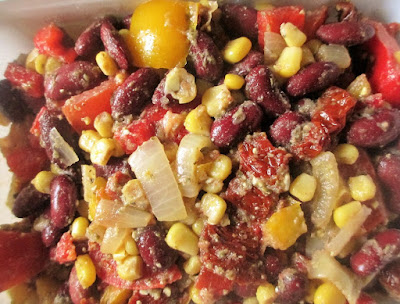 I chopped an onion, half a large red bell pepper and half a medium yellow bell pepper and sauteed these in olive oil. Meanwhile, in a large bowl, I placed a couple of cans of kidney beans, a can of sweetcorn, three chopped fresh tomatoes, some chopped sun-dried tomatoes from a jar, and finely minced red and yellow bell pepper (the other halves). I dumped the cooked veg (not soggy, but al dente) into the bowl. Instead of making a dressing, I added some pesto. The little bit of oil that was still on the sun dried tomatoes and that coated the cooked veggies thinned it down just enough.

So Thanksgiving Part 2 has provided us with more leftovers, which is quite wonderful. I do love my leftovers.

There were three families there besides Bill and me, so I made a few Christmas ornaments--one for each family. 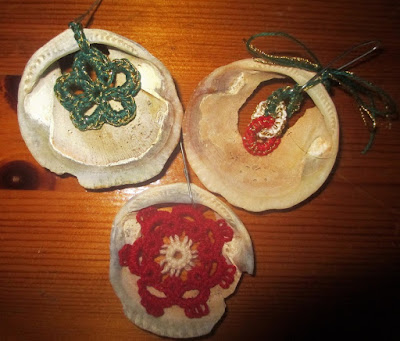 And a small piece of lace for Jodi, who was kind enough to invite us and to pick us up and bring us home--and to provide such a fun and delicious Thanksgiving afternoon. 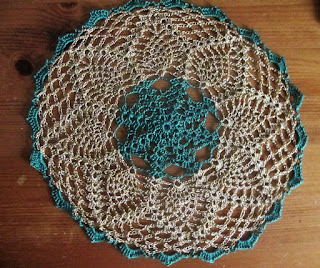 I thought the metallic gold thread would look nice in firelight or candlelight.