Last night for supper I did a clear-out of the fridge and we emptied 4 containers of leftovers for supper and finished off a couple more things that needed to be eaten. I do not like wasting food!

There was a container with cooked brown rice left from a few nights earlier, when we had a Thai veggie stir-fry.

There was a container of chilli beans from the night before--when we got here I could not find chilli powder right away, so I bought a few cans of organic chilli beans (still not used to this spelling of "chilli!"). I still had a can left so one night I sweated some onion and garlic in a bit of olive oil, added some frozen sweetcorn and a can of the chilli beans and let that heat through. We had burritos that night and there was some of that mixture left.

There was a container with one turkey burger in it. We do not have turkey mince available here, but were really happy to find turkey burgers once at SuperValu. We bought 2 packages, but Bill didn't care for them much when we had the first package. I found them acceptable (but not good enough to buy again) so last week I cooked the last package of 4 and ate them through the week.

There was a container of salsa left from what I made for the burritos. I had 4 or 5 tomatoes so I chopped them up and put them in a bowl. I added a chopped onion, a chopped fresh jalapeno, and a couple of cloves of minced garlic. I sprinkled some oregano over it all, added a tiny bit of sugar, and drizzled with cider vinegar before mixing it all up.

So to use it all, for Bill, I put mixed some chilli bean mixture and brown rice in a bowl and heated in the microwave. I added some cheddar cheese and stirred it in. I spread this on a wholemeal wrap that I'd folded in half and he topped it with salsa. For myself, I added the turkey burger--chopped--into the beans and rice mixture, added the cheese, spread it on the last wholemeal wrap folded in half, topped it with the last of a head of lettuce that I tore up and some salsa. It was delicious!

This left the fridge almost empty and ready to be resupplied. This morning we filled in the empty space :-) 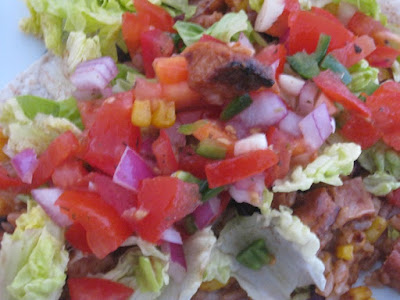