Last autumn, we decided to toss the rest of our chard seeds into a pot of dirt to see if they'd come up. There were too many for the pot, so I also put some in the ground. It wasn't long before we had chard coming up. The stuff in the pot got eaten as soon as it grew, but for whatever reason, the stuff in the ground grew through the winter. Bill put the pot of dirt behind our shed and we forgot about it. Then a few weeks ago, he came out holding the pot, which had a tiny chard plant growing in it. We put it on the wall so it could get some sun and it started to grow. It looked like it was going to survive, so I decided to make a better pot for it, instead of the black plastic one it was in. I rummaged around in the box of yarn scraps and came away with some small scrap balls of oily, rough wool that I'd gotten in a charity shop and used for other projects. There wasn't much and it wouldn't really work in a scrap project with other yarns, so I decided it would be perfect for a plant pot. I crocheted a circle and then switched to Tunisian in the round, using both colours until one ran out, then finishing with the brown. 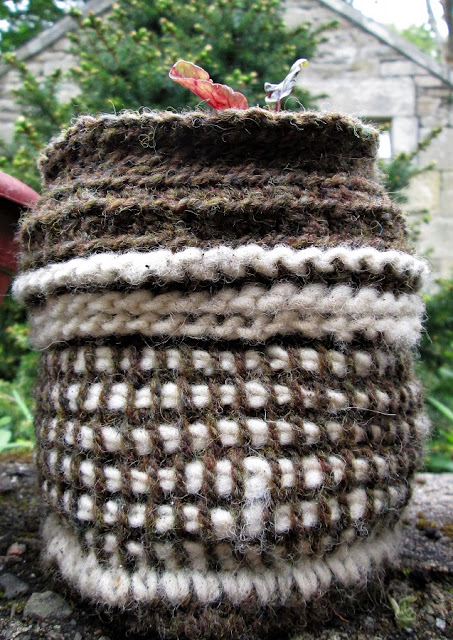 I finished it off with a few rounds of slip stitch through the back loop. to narrow the top. I re-potted the chard plants and stuck in some scallion ends, too. Everything is growing--yay!

Last weekend while we were walking, we stopped at veg man's stall and walked by the plant guy. I spotted this celosia plant and fell in love with it, so bought it. 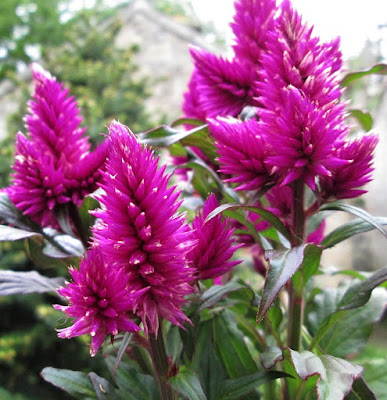 I started felting a pot the same day I came home with the plant, going through my roving scraps and choosing colours that I thought would look good with the flowers and stabbing away at it with my barbed needles. Then I quilted all over it to firm it up and make it more sturdy, using three colours of perle cotton scraps. That took a very long time, because I was making lots and lots of tiny stitches. I would be listening to podcasts and stitching away--it was very meditative and I enjoyed watching the way the colours played together and how the texture of the piece changed as I worked. But then I'd look up and three hours had passed and I had only a small area quilted! The other afternoon/night I worked on it a lot--I just wanted to get it finished, which I did. Then yesterday, I poured boiling water over it, then cold water, then more boiling water, and finally another dousing of cold water, doing some rubbing in between. I like the way this finishes things off. I let it sit and when we got home from our morning walk, I planted my celosia in the pot and gave it a drink of water.

I see that I should have made it taller. At first I thought it was too wide, but the circumference actually looks OK. In spite of the height issue, I love the way this came out. Whether or not I would make another one of this size is a different matter, since it took so long, but I'm really happy with this one.

And so another week begins. Here's hoping it's a good one for all of us!
Share
Posted by Shari Burke at 29.4.19