The first cruise ship of the season arrived today, bringing 600 passengers (mostly British, it seems) and 400 crew members. That just about doubles the population, at least for the day. 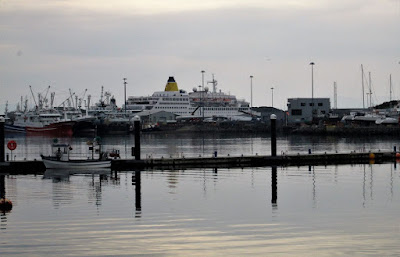 The town was bustling. We took wee Finn on our daily walk and he acted as a good ambassador for Killybegs, greeting people as we went along. One woman was walking very slowly with a stick, but when she saw Finn, she had a big smile on her face and was stooping down to pet him, even as she continued to walk towards us. He continued being fabulous as he accepted the admiration of the tourists.

When we had gotten through the town and were on the outskirts, it was very quiet and we didn't see anyone. I did pause to enjoy the rhododendrons, which are opening and looking quite spectacular. 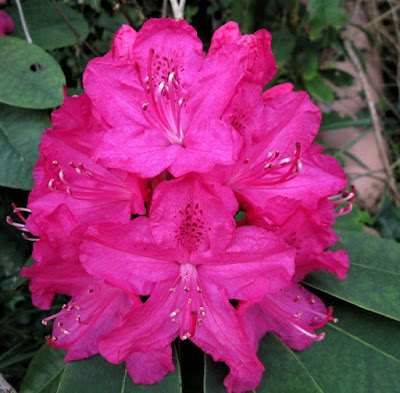 After the quiet interlude, we went back through the town centre. By then the Irish music was playing near the Diamond, the picnic tables and benches were filled with people, and folks were milling about.

The ship will be leaving at 5 this evening. The next one is Italian and won't be here until 1 June. That one will be here for two days and one night and holds even more people. The new cruise ship season has begun.