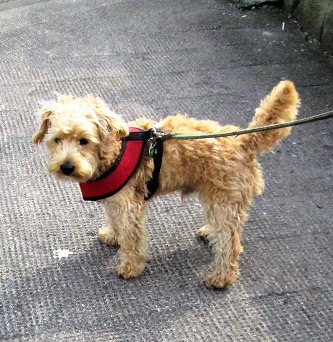 This is me today a couple of miles into my walk. I'm still kinda new here--only been hanging around these parts for a few months--but I like it! Shari and Bill are my neighbours and this morning they heard me barking as they were leaving to go on their walk, so they called over to ask my mom if I wanted to go with them, and Mom said I could! She got my fabulous short lead, handmade out of Donegal Tweed so I'd be looking good for any adoring fans I might meet along the way.

There was a lot going on and I raced along, so I could get to the next bollard and sniff, but sometimes I had to stop and leave a message of my own. The thing is, I'm a wee guy and my bladder is small, so I ran out pretty quickly. But you know what they say, 'Fake it till you make it!' so I did! I kept lifting my leg and lifted as far as I could go, even though I had nothing left to give, but a couple times I almost toppled over, so I had to be more careful.

I was bouncing along when I suddenly saw this terrible thing! 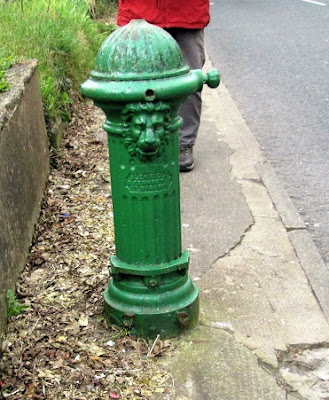 I did not like it AT ALL! I backed up, crouched down, and started barking at it. Shari told me there was nothing to worry about and we could keep going, but I was wary and looked at it for a while. 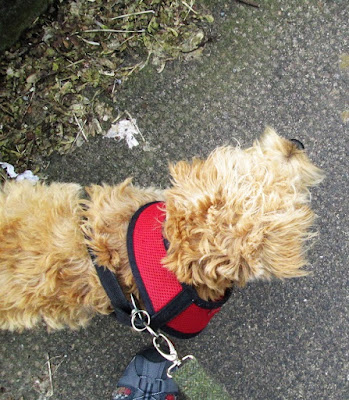 I'm a tough guy, though, so once I had barked enough to get my message across, I trotted right by--guess I taught this thing a lesson! Shari told me that there was a big dog in the window across the street, but I was busying giving this face thing a piece of my mind and didn't see him.

On we walked and there was a lot to see and sniff--so much going on. Eventually, we came to Killybegs Seafood Shack. Over the weekend, they won the gold medal in the All-Ireland Chowder Championship, so I was hoping maybe there'd be some samples, but they were closed. Bummer! 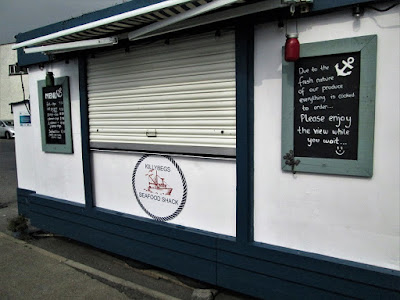 When we got back to the bottom of our lane, I still had a spring in my step, so Shari and Bill decided we'd keep on going to the grocery store. When we got there, Bill went in and I waited outside with Shari. There is a low stone wall by the footpath, which I tried to tear down with my front paws. I got a rock out of it, so I did my part. Then I decided it would be a lot of work, so I jumped on top to supervise Bill as he put the courgette and raisins in his backpack. I waited for him to give me the treat I was sure he must've picked up for me in there, but inexplicably, none was forthcoming. I can see I have some training to do with this guy! 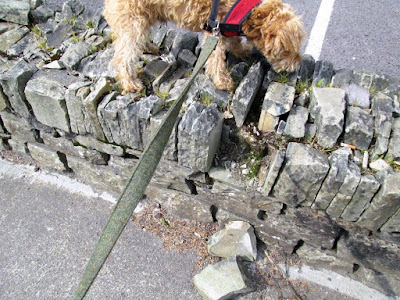 It was a good 3 1/2 mile walk, in spite of my untrained companions. I am sure they will improve as time goes on. Hopefully they will be fast learners and their training will not require too much work on my part. They told Mom that I could come with them on walks again in future, so they'll have a chance to do better next time!

I'm having a little rest now. I hope you're having a nice day, too--and that no one forgets your treats!

Delightful post!
Cute doggie companion . ..
Quite the walk for those short little legs!
(Better come up with some treats Bill!)