All Four Seasons in One Day

There are jokes and souvenirs here about Ireland being a place where you can experience all four seasons in one day. We've lived in several places where people told us that if we didn't like the weather, we should wait five minutes and it would change. This was never actually the case--until we got to Ireland. It is certainly true here. Sometimes the change comes in a few minutes and sometimes one doesn't even have to wait at all. I can remember days in Moville when I could walk out the front door into the rain and out the back door into the sunshine. The only reason that's not possible here is the lack of a back door! Since the time change the other day, it's still light at 8:30--even if the westher is unpredictable, we can know what to expect as far as sunrises and sunsets go!

Yesterday was a day in which various seasons were on offer. There was bright sunshine and warm temperatures one minute before it cooled off as the rain bucketed down and then moving to a sharp wind and hail shower situation. We experienced several seasonal changes back and forth throughout the day. 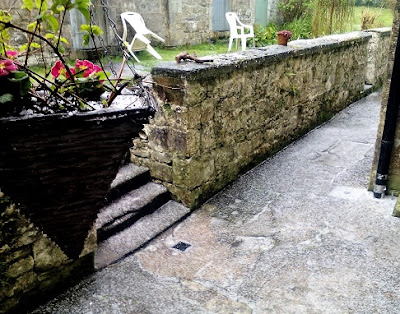 Today is much the same. There's a bit of a roar from the wind and it's chilly enough to wear a jacket. The sunshine has sparkled off the water and then given way to showers of rain and hail. We walked into town to do a few errands and Bill was happy to have sunshine with us the entire time. It began lashing down just after we got home.

We stopped at the charity shop where I was happy to see that some new books had been added to the shelves. I found a couple of good ones that I was unaware of, so would not have known to look them up in the library and Bill found a nice photography book. I also found a wooden embroidery hoop, so I brought that home along with the books.

I will probably read the library books I have checked out before reading the two I got today, but I expect I'll get to them fairly soon.

Here's the rest of my March book list--a few older ones in this section, along with a couple of new ones.
The Descent of Man and Other Stories by Edith Wharton
I needed something to read on the bus one day, so took my e-reader and chose this book of short stories. It was a good choice.

The Red House Mystery by Margaret Hungerford
I discovered this author in the book about modern Irish women writers that Bill got me a few months back. several of her books were available on Project Gutenberg, so I downloaded them. This one was published in 1893 but the main storyline seemed to be so current in a sad kind of way. The red house of the title is home to Dr Darkham, his wife, and their grown son, who is deaf, unable to speak, and has some other ailments. This is not a happy family. The son and his mother have a strong bond, but neither of them care for Dr Darkham and he cannot stand to be around them, either. He married his wife for her money and often wishes he had thought twice before doing so. He has no affection for his son. He has, however, become obsessed with the orphaned niece of a patient. She, in turn, finds Dr Darkham repulsive, sinister, and wants him to leave her alone. She is interested in someone else. Mrs Darkham takes a fall, is unconscious, and is soon helped out of this world, leaving Dr Darkham free, as he sees it, to more freely continue the stalking of the young woman who is uninterested in him. Twists and turns occur. In addition to the stalking issue, the book also addressed gender ideologies and class issues of the time--one might have hoped for more progress since the 1893 publication of the book, but as we know, such things are still affecting people, albeit in more modern ways. In spite of the tidy ending, which was not really a surprise, I thought this was a good book and I look forward to reading some of her other work.

The Hermit and the Wild Woman and Other Stories by Edith Wharton
Another bus ride and another Edith Wharton short story collection begun. I find it handy to have my e-reader with me when we hop on the bus and short stories are the perfect thing. I finished the book here and there when I had a bit of time.

Stargazing at Noon by Amanda Torroni
I came across this poetry collection while scrolling through the e-book section of the library. One poem begins with ‘you are not lost/ but in transit’ which I quite liked.

Useless Magic by Florence Welch
This is a book of poetry, song lyrics, doodles, drawings, artwork, notes, and musings by the frontwoman for the band Florence and the Machine. I am vaguely familiar with one or two of their songs and her voice is distinctive, so if I heard others, I might be able to identify the band, but I am not a huge fan or anything. I came across this book in the e-book section of the library website and because I am very interested in the creative process, checked it out. I’m glad I did. It was an interesting glimpse into someone’s creative life. It was a bit dark at times, but still worth the read.

I hope it's a pleasant day in your part of the world.

Sounds like Indiana! Sun then rain and sleet and SNOW!!!!