What I'm Listening To and Watching

I like to listen to something while I'm stitching. Sometimes it's music--usually classical, but some other kinds as well once in a while. I also love podcasts. I'm thrilled because A Good Read has started back up again (it runs 8 weeks on and 8 weeks off and I download it from the BBC Radio 4 site). I also enjoy The Life Scientific and BBC Inside Science. In Our Time offers fascinating discussions on a wide range of topics and I've learned a lot from that one over the years. Only Artists is really interesting. In that one, two artists, usually from different parts of the art world get together and talk about their creative lives. So there might be a writer and a painter, a playwright and a comedian, an opera singer and a sculptor, a musician and a landscape artist, or any other artistic combination.

Yesterday, I mentioned that I was learning about a new-to-me podcast as I was typing, called Shedunnit. I tried it out last night and I am so glad we happened to have the radio on at the right time to hear about this podcast! I love it! The subtitle is 'The podcast that unravels the mysteries behind classic detective stories.' I decided to begin at the beginning, so listened to the short introductory piece, in which the host mentioned that one appeal of these stories is that they often dismantle the assumptions about the elite in society as the curtain is pulled back on their rarefied worlds and the readers sees what lurks beneath the genteel veneer. I am not sure I've ever thought of it that way before, but I can see how that would be something that appeals to me, as these stories do.

I listened to the first three podcast episodes last night. The series began with a discussion of the 'surplus women' in the UK after WWI and how that impacted the Golden Age of Mystery writers, readers, and characters. The second episode was about the real life case of Dr Crippen, which inspired mystery authors. The third episode is titled 'Queer Clues' and is about how gay people were portrayed in these books and how they made their way in the culture of the time. There are several more episodes that I haven't yet listened to, including one on food in these books, crime at Christmas, adaptations, and more. The host, Caroline Crampton, who researches and writes each episode, just posted a new one today, about the rules of these stories. I will look forward to getting to that one, but am going to listen in order, even though it seems so far like it's not really necessary to do that. Yesterday at this time I didn't even know this podcast was out there. Today, it's one of my favourites.

As for the watching, when we moved back here, we requested that the TV be removed. We had some sort of free cable, but we never watched it and the TV was just taking up space that could better utilized, so we were glad to get rid of it. I do watch some things on youtube, though. Sometimes I leave a video playing and listen while I stitch, but sometimes the visuals are important. I particularly like watching art videos of various kinds at the end of the day, after I am done stitching and before I go to bed. One channel that I recently discovered is The Art Assignment. I think I started with 'The Case for Abstract Art' and went on from there. I watch one or two every night and each one has been informative and given me food for thought. The website is here, but it looks like the series has changed slightly since its beginning. Not sure what the 'assignments' are about and I haven't seen any episodes in which that is included, but maybe I will as I go through them. I'm not watching them in any particular order, but clicking on whatever subject matter strikes my fancy on a given night. The host discusses the topic and appropriate artworks are presented on screen. Most of the ones I've watched have been between 5 and 11 minutes long, and a fair bit of information is provided in that time, which can serve as a jumping off point for the viewer if they want to look into a particular topic or artist more deeply.

At the moment, we have the radio on, as we often do. We got back from doing some errands a while ago and I had a cup of tea while listening to the music. In spite of our brief encounter with semi-winter last week, the flowers continue to bloom. 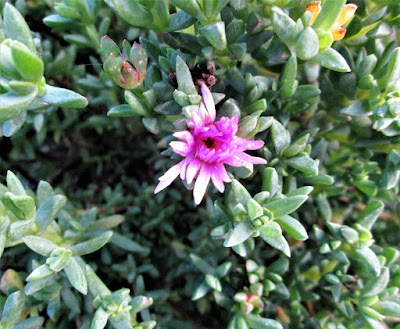 I hope it's a nice day in your part of the world.
Share
Posted by Shari Burke at 6.2.19