She Wrote It, She Created It, Shedunnit

I'll start with the last part of the title. I am listening to a segment of Arena on RTE Radio 1. He and his guest are talking about a podcast I am not familiar with and did not know about. It's called shedunnit--it's apparently about the women, times, cultures, and writing of Golden Age authors. I will be exploring this later. Just heard an excerpt and it sounds great!

Went to the library today, where I returned some books and picked up several more that had come in--novels, short stories, a biography, books on women and art, women writers, and a collection of writing by and about women in the northwest of Ireland. One of them is about women and books in art. Fun! I have yet to decide where I will start, but I will in a while.

Here are the rest of the books I read last month.

Abstract Art by Dietmar Elger
The book has a short introducton and then provides short pieces on various artists and their work, along with a photo of one of their pieces. It was an interesting book and the photos are great, but the lack of women’s art is a flaw.


Revelations of an Ant by Phil McCloskey
I found this poetry collection when I was poking around in the Donegal Studies room of the library. The poet is a local woman who has won various awards for her poetry, some of which made reference to this particular area.

Vanishing Memories in the Parishes Taughboyne, Allsaints, Killea
This is a collecton of stories collected in 1937 and 1938 by schoolchildren in these areas as part of the National Schools Folklore Project. Children were given a list of topics and instructed to talk to older people in their families and communities about them. This is a fun little book, which includes stories and pictures.

Home by Maureen Curran
I found this poetry collection one day while browsing in the Donegal Studies room of the library one day. I enjoyed it a lot.

Abstract Expressionism by Barbara Hess
This book is in the same series (published by Taschen) as the Abstract Art book I read and uses the same format of a short introduction, followed by short discussions of the lives and work of individual artists. Accompanying the text for each artist is a photo of one of their works. A few artists had more than one large photo and a longer write-up. This book was better than the other one, in my opinion. The author included several of the women artists and discussed the ways in which ther work was dismissed, and, in the case of the women who were married to more famous men, the ways in which they were expected and forced to take a back seat to their husbands. Some of the artists were in both books, but I think only one photograph of the art was found in both books.

Gathering Carrageen by Monica Connell
I discovered this book one afternoon while browsing n the Donegal Studies room of the library. It is part memoir, part ethnography. As a child, the author and her family often went on holiday to a cottage in Donegal, which was quite a change from their everyday life in Belfast. She states that she always wanted to go back as an adult and write a book about life there, so after studies in sociology and anthropology, she went back to Donegal and lived there for a time with her first husband. She does mention in the acknowledgements that she got a research grant, which enabled her to extend her time in Donegal, but this is not an academic book. It’s quite readable. As is typical for an ethnography, the name of the place in which she lived is not given, although we know it is near Killybegs, because she mentions coming here to do the shopping. The year in which she arrived is also not given, but based on a few things, including the fact that email and mobile phones are not mentioned, and fishermen talk about their mortification when people write letters to them on the boat, it does not seem as though it is a very recent experience, even though the book was published in 2015. It is the case that broadband is still a problem in many areas here, but mobile phones are now ubiquitous and we see ship crew walking around with their eyes glued to screens all the time, so if this was happening now, there would be social media and text communications, not written letters. People are given pseudonyms, with, she says, a few exceptions.  I was most engaged when reading the memoirish parts about her holidays in Donegal as a child, her father’s mental health issues, and how Donegal was a link to him after his suicide. Had she put more of herself into the descriptions of her time there, it would have been a more interesting book--at least for me. I’m familiar with the structure of the book--arrival, seasonal round, chapters on various aspects of life, etc. In this case, there are chapters on turf cutting, sheep farming, fishing of various kinds (from personal boats to herring trawlers), Christmas, pubs, and, of course, weather. But it was all told from a distance. It was a pleasant enough book, as descriptions of certain activities and ways of life go, but I was disappointed. It was almost journalistic--this happened and then I went over here and that happened. There’s nothing wrong with that and the writing and descriptions are good. It’s just not what I was expecting and that’s my issue, not the author’s.

Just after we got home, the mist gave way to lashing rain. Bill was pleased about the timing. I stood in the doorway for a few minutes to enjoy the downpour. I hope your day is full of small happy moments, too. 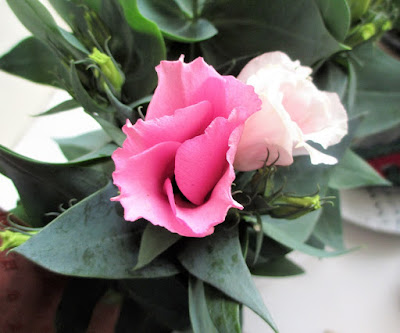