When we were in Donegal town the other day, we called into the Animals in Need charity shop, as we usually do. We looked at the books, as we always do. And I looked at the necklaces, as I have recently made it a habit to do. I have found some really interesting necklaces there--I'm not interested in wearing any of them as they are, but the pendants, beads, and other assorted parts are often unique and can be used in other ways. This time, I had one that was a thin wire choker with beads, some on the choker and some dangling, that I did want to buy for someone to wear, but when we went to pay and I handed things over to the volunteer, the clasp came undone and she couldn't get it to close properly. She apologized and set it aside. It was only later that night when I suddenly could picture how I could have used it in a completely different way and I could have kicked myself for not taking it anyway! I am considering speaking to the volunteer the next time I go in there and asking if they would be willing to set any broken or unsalable necklaces and bracelets aside in a bag so I could buy it as a lot when I pop in. I'm thinking that would not be much of a burden to the volunteers, they wouldn't have to throw it away, they'd get a little extra money from things they wouldn't otherwise be able to sell, and I would get some cool bits to use. Seems like a win all around!

In spite of the fact that I wasn't thinking quickly enough to take the choker (and I will probably keep thinking of the project that might have been!), I did end up with a couple of great finds! One was a long necklace which consisted of a couple of black plastic cords attached to a clasp, and carrying all of these metal beads. I was pretty excited about this one! 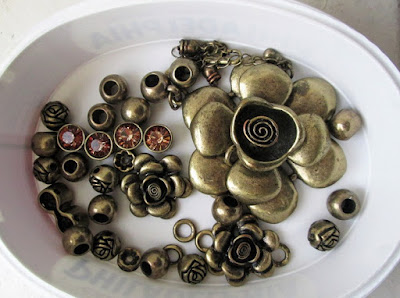 It must've been there for a while, because a few other things were pinned to the board on top of this and it took a bit of effort to extricate it. The large rose measures 2" across and is fairly heavy. The two smaller roses are an inch. When I saw it, I knew it was coming home with me, but didn't have a plan in mind for any of the bits and I still don't know where all of them will end up. But last night, I knew where one of the small roses was going.

Several months ago, when we were still in Moville, Bill had picked up a bracelet for me to deconstruct at a charity shop. I had an idea for a few of the beads, so needle felted and stitched the background. When I started placing the beads, though, I didn't like it. I kept the needle felted disk on the table by the couch so I could see it and every once in a while, I would have an idea and try it. None of them worked. It got packed up when we moved and I forgot about it for a while. Then I found it and had yet another idea. That was promising, but it was still missing something, so once again, I laid the disk and the embellishment on the table by my chair. I considered beads or buttons or something, but nothing seemed right. Last night, I thought of the small metal rose. Today I brought it down and tried it by itself. Nope. then I placed the tatted flower behind it and smiled. Finally! I sewed them on. 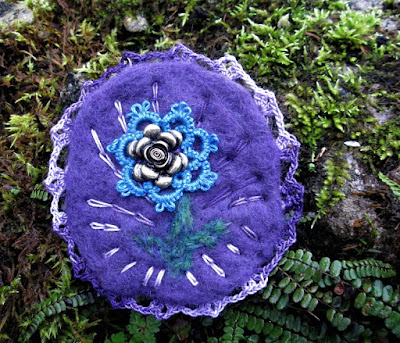 To finish, I decided to make a small piece of crocheted lace that is slightly larger than the felted circle and sew that onto the back. I wanted it to just peek out a little bit from behind and make a kind of border. here's the back with the pin sewn on: I am glad to have finally finished this after a year or so. I am so happy with it.

I've been gathering containers to use to store the deconstructed jewelry parts in an organized way. I've taken apart some pieces, but others are still intact and just sitting wherever I had a place for them. I need to get things organized better so that things are easier to see and access. That will be a project for next week! I would not be at all surprised to find things I'd forgotten I had. I suspect it will be a very inspirational activity, too. Who knows what happy surprises I will find?! I hope your day has some happy surprises in it, too.

O its very nice with the metal rose! Super idea!