A Wee Chat on Main Street

The other day in Mountcharles, we had a chance to have a wee chat with a local guy named Turlough. He'd passed us earlier when we were walking around and said hello. By the time he was going back the other way, we were sitting on a bench because we had a little time before the bus was due to arrive. He stopped and asked if we were visitors. When we said we lived in Killybegs, he commented on how Killybegs is booming, which seems true enough. Then he said we didn't sound like we were originally from Killybegs and asked if we were from the States. He told us briefly about his experiences in the US and where he'd been. Then he started talking a bit about Mountcharles. He talked about the bypass that was built, which enabled the trucks to whiz by on their way to and from Killybegs with supplies for the fishing industry, wind turbines, and other port related things. It's true that it would be difficult and disruptive for large trucks to be moving through the town. Even though the bypass runs right alongside the town, I wonder how much its existence has furthered the decline. There are a lot of vacant buildings and from the signs that remain, it looks like it was once a more vibrant community with some artists doing work there. There was once a pottery studio and another art and craft studio, both now empty. Turlough said that at least one-third of all buildings in the village are vacant. I'd seen this unfinished house in the distance earlier in the day.

He said that at one time, there were 10 pubs in the village (!!!), but now there are only two. This looks like two, but is actually one pub, I think.

I'd been wondering about what this place used to be and who the Gillespie Brothers are/were, so I asked him. 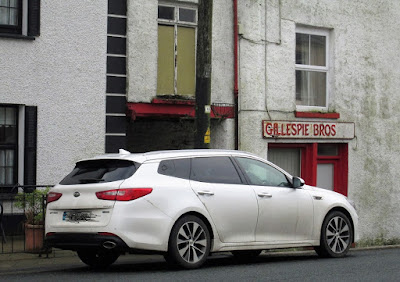 He said they used to be tailors and would make wonderful suits that fit each individual perfectly, before the days of mass production and cheap clothes. Their sister used to run one of the pubs that is a few doors away.

It was a nice chat and I was glad he stopped. After he left, Bill commented on a couple of books that he'd had seen earlier in the day while we were in the post office. I'd not noticed them, focused as I was on getting things posted, but as he described them, they seemed worth checking out, so we went back. 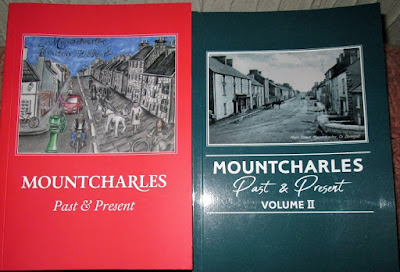 We thought they'd be more expensive than they were (it is common here for no prices to be put on things, which I find very annoying). The guy in the post office was actually apologetic when he said the red one was €5 because it was older and the green one, being newer, was €10. He seemed surprised, but pleased, when we bought both. His face lit up and he said, 'That's grand!'

The books were compiled and published by the Mountcharles Heritage Society. I've seen other such collections from other places. I think it's a great idea. We have several of these kinds of collections now and they are really fun and informative to read. It's nice to have them and it was great that Turlough stopped and chatted with us. We enjoyed the conversation a lot.