Radiator in the Refrigerator

The other day, Bill commented that things in the fridge felt like they were not as cold as they used to. I agreed. As I thought about it, it seemed that it was running all the time, too, but not getting cold. At one time, a couple of months ago, I piled stuff too close to the wee freezer compartment and my hummus froze. Now that wasn't happening, which was good, but things just didn't seem like they were cold enough. I wondered if that was the case, or if it was just me. We didn't have much in there and the milk wasn't going off, so we just kept an eye on things. I felt around and it felt hot around the area of the light, so Bill tested the switch that gets pushed when the door closes and the light went off. I thought it was odd that it was hot, though, so I looked it up and found out that it was probably the switch. I tested it again and this time, the light either stayed on, flickered, or, once, did turn off. So there was the problem. The light was staying on all the time and emitting heat into the interior. The cooling could not keep up.

We very briefly considered removing the bulb and seeing whether that solved the problem, but it's not our fridge and if it turned out that there was some other issue, the owner should know about it. I knew last night that I'd have to call the letting agent who takes care of the place and that the process would probably be slow. He doesn't like to respond to emails, but I like to have a dated record of things, so I emailed first and then called the office. I was thrilled when his mother answered. She sometimes helps out in the office when he is off doing things elsewhere.

I explained that the fridge wasn't working properly and she replied that she would tell her son when he returned and he in turn would contact the owner. Then they would send a tech guy out and then they would determine whether it could be fixed or would need to be replaced. At that point, I commented that I cannot keep food in the fridge because the temperature is in the unsafe zone. Everything changed. She said this needs to be fixed as quickly as possible because the fridge is one of the most important things in the house. She said she'd get a tech guy to come look at it. We hung up. She called me back within a few minutes, said she'd spoken to him, and he'd be here today. I marveled at the speed at which things were happening. It was helpful in this instance, I think, to be talking to a woman who raised 5 children and knows something about the importance of a stocked fridge 😊

The guy came and I explained the issues. It was indeed a faulty switch, but he didn't think he'd find a replacement--said the kind he'd need is obsolete. So he removed the bulb and said it should work fine now. He kept saying that even though it's just a 15W bulb, it gives off a lot of heat and acts like a radiator in there. 'The light'll be on night to day and giving off heat all that time,' he said. He explained things a few times to me and chatted about the fact that appliance companies are buying up smaller ones and consolidating. He doesn't think they sell this kind anymore.

Bill was upstairs when the guy came, but after about 10 minutes, he came down. At that point, the guy was just telling me stuff and had done what he was going to do. He saw Bill, said hello, and then repeated everything to him a few times. Both of us had the impression, from his body language and the way he was talking, that he felt it important to communicate with the male who was present about this appliance issue.

The letting agent's mother had asked me to turn the fridge off. The tech guy turned it back on and said it would take a few hours to cool off properly. He repeated this just before he left and I commented that we'd borrowed a cooler from a friend and had some things in there, so they'd be fine. He looked at me with a slightly puzzled expression, but sort of looked in the direction in which I was gesturing. 'Ah!' he said, his face lighting up, 'You have a cool box!' Another Irish-English lesson learned!

After he left, I stuck a thermometer back in the fridge and an hour later it was already colder than it's been for the past couple of days, when the temp had gotten into the 50s. It was back down in the 40s at that point. Hopefully in another hour or so I can empty the cool box and take stuff out of a friend's fridge, although I'll probably save the latter for tomorrow morning. 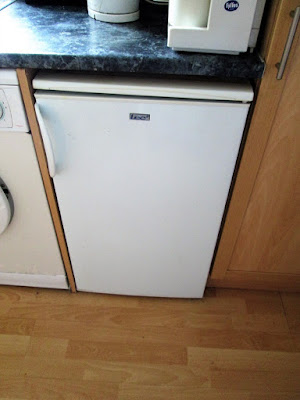 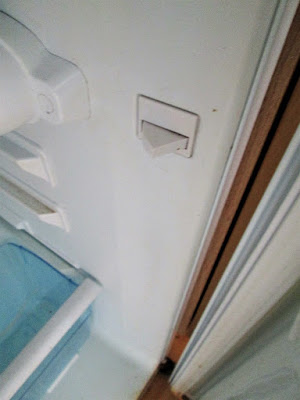 May your refrigerator never contain a radiator light bulb!

I hope that does the trick . . .
Although I would wonder about the switch as well . . .