I'll be starting a new month of reading shortly, but for now, here is the middle part of September's book list.

Speedy Death by Gladys Mitchell
This is the first of the author’s Mrs Bradley mysteries. In it, an elderly man is found dead in the bathtub. This is declared an accident--but was it? When I got to the end, I went back and read the last page or two over again to make sure I’d actually read what I thought I did.

Mystery of a Butcher’s Shop by Gladys Mitchell
The blurb on the front of this one quoted a reviewer in The Independent, ‘Superbly odd.’ I thought that was a good description of all of the Mrs Bradley books I’ve read so far. This is the second in the series (of 66 or 67) and the third one I’ve read--all three have been quirky and somewhat strange, but I’ve enjoyed them. In this book, the lord of the manor character goes missing and a headless body is found in a butcher shop. It’s not as gruesome as it sounds--she is not like some authors who would describe the process in as much violent detail as possible. There is a cast of characters--villagers, the vicar, his daughter, and housekeeper, the other inhabitants of the big house, and of course, the hapless local cop. Like the other books, the ending is different than what I would expect.

Mystery of Three Quarters by Sophie Hannah
This is the third Poirot continuation novel written by Sophie Hannah. There is something slightly off about them, but I find them enjoyable nonetheless. I have a soft spot for Poirot--been reading those books since I was a teen. Interestingly, this one, like Speedy Death above, involved someone who died in the bathtub--was it accidental or did someone enter the bathroom and yank the deceased by the ankles in order to drag them under? Poirot gets involved when people show up at his home angrily demanding to know why he sent them letters accusing them of murdering the guy. He has sent no letters and never heard of the deceased, so he decides he has no choice but to investigate.

Overdressed: The Shockingly High Cost of Cheap Fashion by Elizabeth L. Cline
I was vaguely aware of the issues surrounding fast fashion--enough so that I made it a point years ago, for ethical reasons, to buy new only when absolutely necessary. I am not into fashion and loathe shopping, so I must admit that this is not much of a hardship. I have clothes that I got at thrift stores before we left the US, clothes that were hand-me-downs about 15 years ago, a few things I’ve bought at charity shops here, and a lot that I’ve made myself. Reading this book gave me no reason to change my mind about my clothing choices. There is so much wrong with the way the whole industry is run and I knew about most of those issues before I read this book. Reading about how people shop and how the shops operate was like being in a foreign country though. I wasn't surprised, but it was eye-opening. I cannot remember the last time I went into a shop to buy clothes. It must be 20 years or so, I suppose, and things have clearly changed in that time. It’s also true that I’ve not lived in places where these cheap stores operate and I don’t seek them out, so have no familiarity with them. Some stores apparently get new shipments once or twice a week to draw people in. Now that they need to keep cutting costs, they use cheaper and cheaper fabric, which means polyester (plastic). Since these clothes are shoddily made and people buy them knowing they’ll discard them after a few wearings, if that, a huge waste stream of plastics is created just through clothing. The waste stream from textiles in general is staggering. A few months ago, we started checking charity shops for a few shirts for Bill. It took a couple of months, but finally, he hit the jackpot in our local shop. he bought three (cotton) shirts, two of which still had the tags on them. They'd never even been worn. At least the previous owner didn't throw them away! The author goes through the issues one by one, and then talks about what people can usefully do differently.

I hope October has started off well for you! 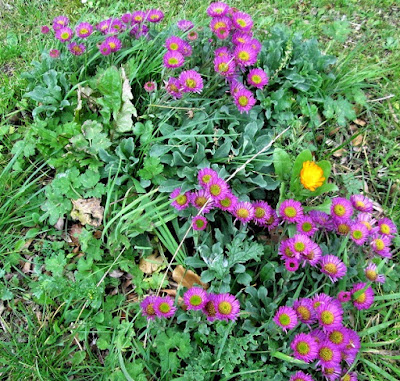