Several years ago, I began experiencing the symptoms of Raynaud's in my hands. They'd get painfully cold and then warm up too much to become painfully warm, red, and itchy. My fingers would puff up and get stiff. I learned that arm warmers/fingerless gloves helped quite a lot to ease the pain and discomfort.

A little less than a year and a half ago, we were living in an apartment with tile floors that looked great, but were always cold. I began to experience the same symptoms in my feet and toes. There seems to be no good solution to this and the advice given is to not let your hands or feet get cold. Easier said than done, but I do what I can with my woolly creations and have been happy that I have plenty of socks in various thicknesses and fibres to help.

There was one fly in the ointment and that was at night. Almost every night, I sit in bed for a few hours and read, listen to podcasts, stitch, or whatever. I have a heating pad that I use if my feet are really cold, and I can wear socks until I am ready to go to sleep, but trying to sleep with them on usually doesn't work for me. And, of course, eventually, I have to get up from the bed to use the bathroom, rinse out my tea mug, or get some thread/yarn/whatever. Every time I got up, even if it was just for a minute or two, my feet would freeze again and I'd have to start the warming process all over again--and veering between cold and hot is exactly what I am supposed to avoid doing.

I use some slip-on trainers instead of slippers because I know I won't slip with them on. I've felt my foot sliding in the past when wearing slippers or socks and I have no desire to take another tumble. They are fine for the purpose, but they have a very thin sole, so the cold seeps right in. I stuck in a couple of store-bought insoles, but they didn't help. I considered using some wool yarn to knit or crochet some insoles, but never got around to it. Then Bill got me a bunch of roving when an Irish online shop was closing down and having a big clearance sale. There was a brown roving that was not merino wool, and so coarser than the others. That was particularly cheap, so he got several of those. I saw it and thought, 'Insoles. I could needle felt some insoles.' So I did! 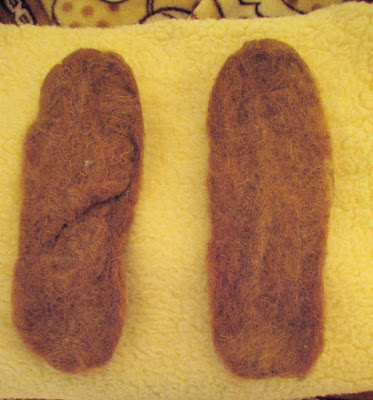 They sure don't look like much, but I stuck them in the 'slippers' and hoped for the best. My problem has been solved! My feet no longer freeze when I get up, which means I am so much more comfortable. I used less than one ball of the roving, so for less than 50 cents and a little time spent stabbing, I made my life a little bit better. I didn't felt them all the way, since I know that using them will felt them further. I might make a pair for my hiking boots before next winter rolls around--I am very pleased.

I hope you are warm and comfortable today, too.
Share
Posted by Shari Burke at 6.4.18

I am glad you found something that works, Shari. I am pretty sure that must be what my mother had but at that time, of course, went undiagnosed. It sounds like exactly what she suffered through. She had a hot water bottle that went to bed for her feet...I don't even know if there were electric heating pads back then.

Hope it is better during the warm months of the year for you. Good job on using the roving to make inserts. xo Diana