Winter(ish) has come to Moville. We have seen some cars with slushy snow on the top and there is a dusting on the hills across the Foyle. I was wondering whether the lane and footpath (sidewalk) in Market Square would be icy, because I was off to the library this morning to hang out with yarn people and the lane is a downward slope. I hate walking downhill on ice, but there was no ice today, so that was good. It is chilly, but not cold. It is a grey day with wet stuff of various sorts falling from the sky, but have we've not had any thunderstorms (yet) which are also a possibility. It's my kind of day!

The yarn people group at the library was nice. I brought one of my ongoing projects to work on and did a little bit in between helping someone with their crochet. We had a new woman last week who was brought by a friend of hers. They came again this week. They take the bus from a little town about 40 minutes from here and they have a little less than an hour until they catch the bus heading back in their direction, stopping off at the neighbouring town for a while. They enjoy the company and the crochet, but they also like the tea and biscuits. Another new person came by today who wants to refresh her knitting memory. She has to be away next week but will be back the week after that. So things are moving along about how I thought they would. I show up, sit there, and stitch. People come and go as they wish. If they want some help, I help them. We all encourage each other, have a chat, a cuppa and biscuits (cookies) and enjoy that bit of the morning. We have knitters in the chairs in front of the big window (and people look in to see what we're doing) and children in the back having story time. In between there are people using the computers, taking out and leaving in books, reading newspapers, and chatting. There's a lot going on, which is exactly what I like to see happening in our wee library!

I found a new-to-me author among the e-books so I checked one of her novels out last night. I will be starting that today. I love it that I can come across people that I never heard of, tap or click, and start reading--all from my bed in my robe late at night.

I've also been scrolling through various e-magazines and saving charts and things for future reference and use. So many ideas get sparked as I scroll through.

There is more stitching planned for today too. I can't post pics of current works-in-progress, so I leave you with a couple of tatting experiments done with scraps of thread a few weeks ago.  I've made many of the standard triangle trees in the past. Some readers may have one--I do tend to get happy about certain motifs at certain times and make a lot of them. For this one I decided to use lots more picots than I have in the past and to add a small crocheted trunk. I like all the picots. Not sure about the trunk. The other is just a small bit consisting of four rings and lots of picots. 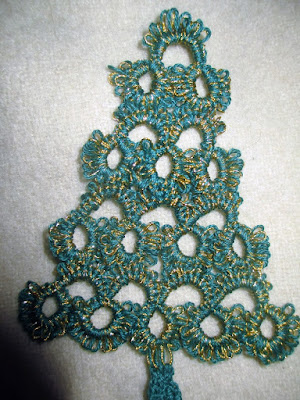 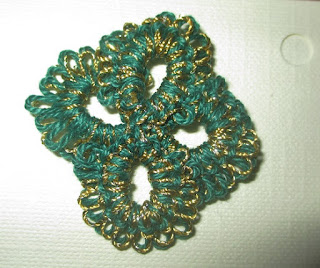 Wherever you find yourself on this Friday and whatever you're doing, hope your day is wonderful!
Share
Posted by Shari Burke at 18.11.16

Dear Shari,
I love that tree! It is so pretty and delicate. You are very talented. Your description of the library group sounded so cozy and enjoyable. I am glad its proven to be pleasurable for you.
I have yet to go the e-book route, but as I now work part time at my local library, I've been discovering many new books to try. Now, if I could only find the time to actually read them!
Wishing you a warm and peaceful weekend.
Cheers,
Dana

Thanks, Dana! I know what you mean--when I worked at a library, it was crazy. I'd be checking books in, looking at them and going, 'Hmm, looks interesting.' and checking out to myself :-) At that library people could check out up to 25 books at a time om their cards, if I remember correctly. All of us who worked there ended up overriding the system and had way more than that! Happy memories! Hope you get lots of reading time this weekend!