It's Friday, so off to the library I went. I was wondering whether the lane would be slippy (roads and footpaths are slippy here, not slippery), but it was fine. I spent some time at the library and Bill met me there, happy to learn that his requested books had arrived and that I had them checked out and in my backpack. Then off we went to pick up a few things at the shop.

We crossed the street because Bill wanted to look at something and we discovered that there was a black Friday sale at the charity shop--everything a euro or less. That is the only kind of Black Friday shopping we would do, so in we went. Bill found a nice waistcoat (vest) with lots of zippered pockets, which will be great for wearing while walking.  I saw this wee candle holder and was immediately smitten with the triangular reindeer with the tilted heads. 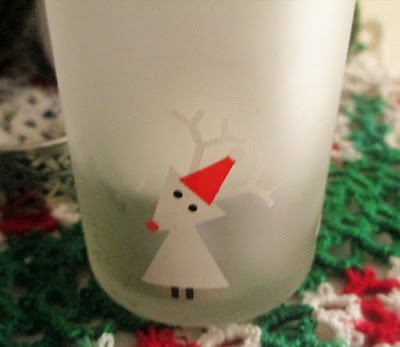 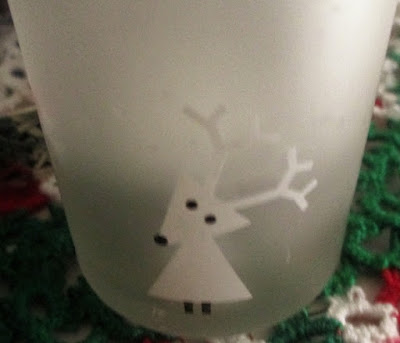 I was thinking that these would be easy enough to chart up and use for cross stitching.

After lunch, Bill went out again to take fog photos and he came across the postman who said he had a wee parcel, so Bill signed for it and went on his way.

Yesterday morning, he'd forwarded me an email he'd gotten from Springwools. It was an announcement about their Black Friday promotion (which started on Thursday). They are offering free shipping (worldwide) on everything all weekend and have a bunch of stuff on sale. I clicked on the link to see what was on offer and commented that the embroidery floss was a really good deal. It is not cheap here--I used to be able to use a coupon and buy 4 or 5 skeins for a buck, but here it's around EUR 1.25 per skein. That doesn't sound like much, but if you are trying to get a decent array of colours, it adds up fast, even if you don't need many shades of one colour. There is also nowhere local for me to buy a skein as needed, so I often substitute crochet thread or multiple lengths of sewing thread, but the thickness can be an issue with the former. You can buy floss bundled at Springwools 100 skeins for EUR 65, but during this sale it is marked down to 30. He asked me if I wanted to get it. I said I'd think about it. I was still thinking about it when he handed me the wee parcel and said, 'That's yours.' I now have quite an excellent range of embroidery floss colours. And I can stop thinking about whether to get it and start thinking instead about what I might stitch with it! I have a project in the queue that will now be much easier because I have this.  He ordered it yesterday and it got here today. They also included a cute tag that I can sew onto something that I want to give as a gift.

Yesterday, I finished both the book I was reading and a project I'd been working on for a while, so I get to choose new stuff to start on today. Guess I'll get to it!

Hope you're having a lovely Friday!
Share
Posted by Shari Burke at 25.11.16