It was quite a pleasant day. We called on veg man where I was happy to discover that he still had pink lady apples. I bought a couple more bags, even though I still had several of them in the fridge. Bill likes galas, and we bought a bag of those too, but I love pink ladies and I know that they will not be around forever. Happily they keep well, so I can buy extra while they're around.

We filled our basket, went to pay, and started chatting. Veg man was happy that the frost was gone and that he'd gotten his Christmas shopping done and dusted. He was laughing as he told us about trying to get stuff inside the house and hidden without his wee ones seeing. He was enjoying the memory and I was smiling as I imagined it. It was such a lovely moment--standing outside in Market Square on a chilly, grey day, with our bag full of fruit and veg, listening to someone share a story about a joyful holiday moment in his life.

We came home and after I put away our food, I went off to my studio/study room to work on a small piece that I've been thinking about for a long time. I have been going back and forth about how to do what I wanted to do and I finally decided the best thing to do would be to just start. I did. I decided on a different route and took a break for lunch. I tried another thing and decided I was complicating things too much, so simplified. That was the answer! I ended up in a completely different place than what I'd envisioned, but the main component was the same and I am happy with where the unexpected path took me. I can't put a photo up just yet, but I will when I can.

After that, I borrowed Bill's computer to watch a DVD that a friend had sent me for either Christmas or my birthday last year--it contains two very old and previously thought lost versions of A Christmas Carol. I am mad about that story and although I am not a movie person, will watch several versions of that each festive season. I will also listen to different versions and read the story itself, which I did the other day. I used to have a book that went through the history of various media productions of the story and the ones on this DVD were mentioned, but it was thought they no longer existed. One was made in 1923 and one in 1926. Both are silent films, so that was interesting. The gestures were all so exaggerated and at times, comical. It is always interesting to me to see which features of the original story are left out and which are emphasized in the different film adaptations. These were short, so much was cut out and a lot was condensed. In one of them, Marley's Ghost announces that he is there 'to represent' the Ghosts of Past, Present, and Future. In one, Scrooge simply sleeps in his office and the ghost(s) visit him there. It was interesting to see how they created certain scenes, given the limited technology they had, and the words they used to tell the story.

In both films, in the scene where the small boy comes to sing a carol outside the office, Scrooge picks up something--in one version it was his ledger book--and goes outside and actually strikes the child in the head! It was a scene that I do not think would go over well like that today.

In the 1926 film, called 'Old Scrooge,' they first put up some educational text and photos, talking about Dickens himself and the parallels between his life and the story. Then they introduced Old Scrooge by showing his face in a circle. I laughed when I saw it because he made me think of a character in an old, bad Western who was waking up after overindulging in bad tequila the night before. He even limped as he walked. Then as the story went on there were other weird moments. After Bon Cratchit leaves for the night, Old Scrooge closes the curtains, blows out the candle and removes his bag of gold from its resting place. The text comes on the screen telling us that there was nothing Old Scrooge liked better than being alone with his gold. He cradled it like a teddy bear as he sat in his chair and fell into a dramatic slumber, before being awakened by Marley's Ghost. At that point, Old Scrooge arched his back as though shot and slid off the chair and onto the floor, where he spent much of the rest of his time with the ghost. He was able to express a lot of emotion from the floor. This was definitely one of the weirder versions I have seen, but I am so thrilled to have it and the 1923 film. 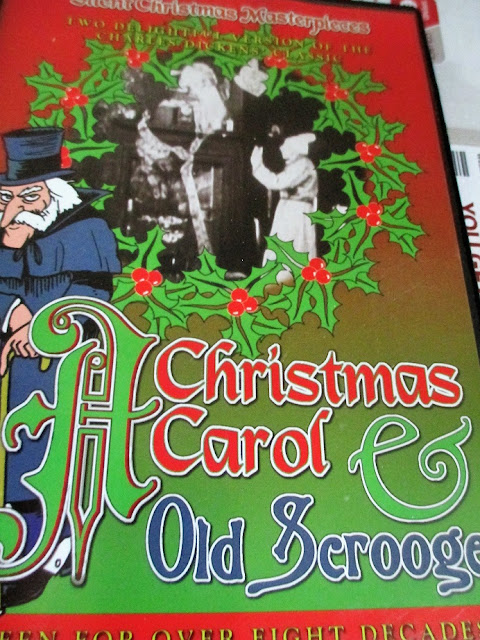 Hope you had a pleasant and productive Tuesday, too!
Share
Posted by Shari Burke at 29.11.16

Dear Shari,
I have a soft spot for A Christmas Carol too. I even played Scrooge in our high school play! After seeing countless versions of it as well (including live, one-man shows), listening to the audio recordings and reading it, my girls and I have settled on the Muppet Christmas Carol as our favorite. It is just about the only mainstream holiday movie I watch anymore.
Speaking of Dickens, we just finished watching the BBC production of Little Dorrit. They made it almost like a one season tv series, with 12 episodes. It was so well done and my girls loved it.If you get a chance to watch it, I recommend it!
Cheers,
Dana

Thank you for the recommendation! I will look for it!

My favourite version of The Carol is the 1938 one with Reginald Owen as Scrooge and the Lockharts as Mr and Mrs Cratchit. I do not know why, but maybe because it is the first one I ever watched 30ish years ago, so I have a soft spot for it. They all have their quirks and it has been interesting to me over the years to see what the different versions leave out, add in, and highlight.

Hope November is ending on a high note for you!