It's Complicated (But It Doesn't Have to Be)

When Gerard and I were talking about ways I might be of use to our beloved wee library, we decided on the knitting/crocheting group for different reasons. I was happy enough to defer to him in this situation, because he has been librarian here for a long time and knows the village and the people who live here. This is a cross-cultural experience for me, so I watch and learn and engage in participant observation.

We agreed to take things one step at a time, first gauging interest, then having a meeting where people could decide what they wanted and what day/time they wanted to get together. Things came together and we had our first meeting, which included someone who just happened into the library at the time we were starting, stayed, and enjoyed it. She has since started bringing a friend.

We went around and said what we were there for--and people had different reasons. We agreed that it would be very informal and people should feel free to come or not as they felt like on the day. The point would be to have a cuppa, a biscuit, and a wee chat while working on something or not, as the mood struck. If someone had something they particularly wanted to learn at some point, then I or we would help them. Seemed pretty straightforward, at least to me. Gerard kept asking if I was OK with things and I kept trying to reassure him that I was not attached to any particular outcome.

Then we had to decide on a day and time, which did not seem that complicated once again. It had to be Wednesdays or Fridays, because those are the days the library is open. Mornings were better than afternoons, because it is less busy then. Nothing here starts too early, so we should start late enough to account for that, but early enough to have a bit of time before Gerard closed up for his lunch break. So options were pleasantly limited, which would make things easier--or so I thought. That thought was wrong.

The woman who happened upon our little group said she would like to keep coming. She rides in on the bus from a town 40ish minutes away and she rides out on a noon bus. Friday was the only day she could come. Our token male attendee lives at the former convent turned elder apartments that is next door to where we live. He'd brought along one of his neighbours and a note from another. The note said that if Friday was the chosen day, there would be one Friday per month that she would not be able to come. Everyone else agreed that Friday would be fine, since that was the only possible day for the one woman.

I was in Clifden the following week, but the week after that when I got there, I was greeted by Token Male who informed me that the woman he'd brought and the woman who wrote the note were simply too busy on Friday and it would not work for them. I should, he explained, either move the group over there to the elder apartment complex or add another group. I told him that since his neighbours had agreed to Friday, there was nothing I could do at that point and perhaps they just were using over-scheduling as a polite way to indicate that they did not want to come, which was fine. Or perhaps it is just an example of the Irish way of not rocking the boat. One of these women knows how to knit and wanted to be 'held accountable' so she would finish a gift she wanted to make and the other had not knit for decades and wanted to get back into practice. It seemed to me there was no reason they could not get together where they live and meet both needs. At that point the bus arrived and I turned my attention to helping someone learn to make a crocheted ribbing.

For various reasons Token Male was absent for a few weeks. Yesterday he was waiting for me when I got there. He told me that he had talked to the woman in charge of such things at the elder apartments and she assured him that we could use the common room at any time. He proceeded to try to sell me on this room--large comfortable armchairs, a big kitchen attached, no limits as to days and times, and no need to share space with children and story hour or library patrons wanting to use computers or read the paper. Plus, he had already lined up at least 4 or 5 people to come and there would probably be more. Some of them are experienced knitters, according to him.

As I was standing there , smiling politely and thinking quickly, I was wondering why on earth they do not just get together in the big comfortable armchairs with tea from the big kitchen in their room and knit away. What do I have to do with any of this? This group came about as a way to do some small thing for the library--leaving the library completely defeats the purpose. Besides that, the two women who come into town on the bus cannot change the day or time. He did concede that it would be a hardship for them--he apparently bumped into one of them recently and asked her. She said she liked it at the library and did not want to go to the elder community. I told him that I am committed to the library meeting as long as it is useful. I reminded myself that he is a nice man who means well and is trying to be helpful. He made sure he had my phone number and repeated that I should at least come over and look at the space. I told him that I would look at the space, but I could not commit to anything until the new year. I was happy enough with myself for that.

In the past I would have felt obligated to try to accommodate people, no matter how it impacted me and my life. This felt like a situation where I could choose to repeat that behaviour or I could put myself first and do what is best for me. I chose the latter.

Right now, at this time of year, the last thing I need is another regularly scheduled thing. I really need this time of year to recharge and refresh myself. I like not having to be anywhere unless I want to be. I am lucky that I have been able to take that time most years. In the years where that has not been possible, I have learned what happens afterwards. There is no good reason for me to commit to this right now. This is not like deciding to go do something on a particular day, which is fine. I can choose to do something or not as things arise. I do not like the idea of knowing that if it's Thursday at 2, I have to go sit in the common room whether I want to or not.

It may be that after the holidays it would be a good thing. I might enjoy sitting around with the women and listening to their stories. I am aware that I will need to have a plan for myself then in order to prepare myself for the onset of the 6 months of depression that will start to descend in March, probably. I am gathering ideas for myself. I have collected the resources I need--both online and in book form-- to engage my mind in various ways. I am even feeling pretty optimistic about it. This is not time for that though. This is time for me to meander through my days, drinking hot beverages, enjoying the cool weather and the darkness, listening to seasonal music, and letting go of the 'shoulds.' I will decide how to proceed with this new group idea in January, if it is still a thing by then. But for now, I am setting it aside. 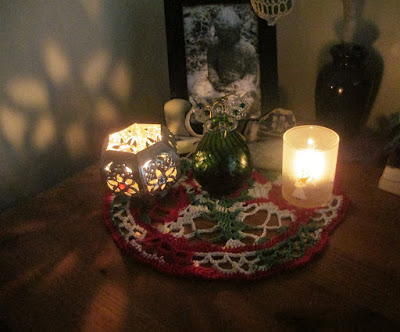