So on Friday night I was tired, a bit brain fogged, and my hands were aching. I'd defrosted our tiny freezer compartment before I went off to the library and even though I wore gloves, my hands were not very happy. I know from past experience that when they feel like that, stitching helps--it loosens my fingers up and increases the circulation--so of course, I settled in with some yarn.

Since it is November, I would normally be picking up some gift stitching and I have a few projects on the go and a list of others. Problem was, they all require some attention at this point and being tired and brain fogged, that did not seem like a good idea. Besides that, a friend had given me a bag of odd balls and scraps, which immediately told me that they wanted to be made into mitred squares and I was itching to cast on, so I did. That seemed like a good project for the moment--not much attention required and using circular needles of a medium thickness would be just right. Ha!

I cast on 60 stitches, placing my marker after the first 30 and began knitting away. I thought the point created by the centre decreases seemed a bit too pointy and the whole thing seemed off somehow, but I dismissed it as being the result of having the stitches bunched on the needle. I was nearing the end, which seemed to be coming with surprising speed, and I still could see that something wasn't right, but on I knitted! A few rows later and I was at the point where I would bind off and I looked at what was hanging off the needles, admitted that it was an interesting shape that I should remember because it could come in handy for a future project, but it was definitely not even close to being a mitred square. I could see that I had decreased too fast. Then it dawned on me and I checked my notes. Yup, I was supposed to knit every other row even, but I was decreasing on every row. Oops!

It was close to 1 a.m. by then, but I ripped out my interesting shape, cast on again, and knit a couple of rows to set things up for the morning. Unfortunately when yesterday morning arrived, the start of a migraine arrived with it, so I was only able to do a few rows (and I had to tink half of one because I'd made a mistake) before I set it aside and went back to bed. By 10 p.m. I was feeling better, but starving, so I got up and ate, read some email and scrolled through my facebook page, and at around midnight, settled back in with my square. And this time it did end up being a square. Yay! 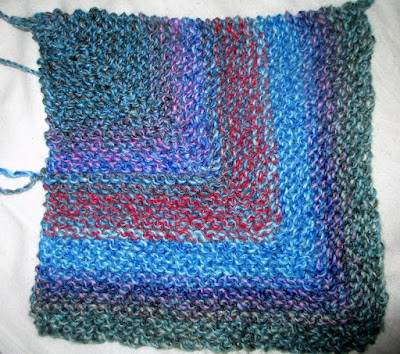 Isn't it pretty? I love the colours and such squishy yarn. This morning I rummaged through the bag and picked out the yarn for the next square, which is worked off of this one. Projects like this are so fun--I love putting scraps together and picking out what colour to use next. 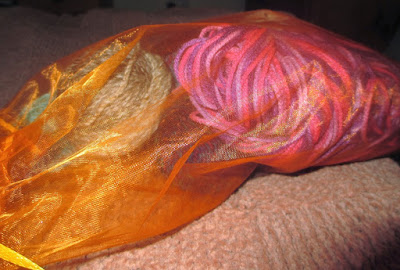