Yesterday morning, while Bill was with the practice nurse (which I assume is like a nurse practitioner in the US) for his blood test, I was sitting in the waiting room by myself, knitting. The TV was blaring across the room--some terrible show about crime, which is apparently on EVERY MORNING!!! They were quite loud as they breathlessly announced this fact. It was a UK show. Was RTE unavailable? It seemed a bit odd to have such an awful show bombarding people with stories about hit and runs, shop burglaries and the resulting trauma suffered by the clerk, and the poor elderly couple who opened their door because they thought it was their carers knocking, only to be robbed and threatened with a razor! They had all of these brochures around about mental health--seems like a steady dose of that kind of crap would not help!

I tuned it out as best as I could. I was reminded once again that things begin later here. It was quarter to 10 when we left and there was still no one else in the waiting room. At one point, the admin person answered the phone and was helping the caller make an appointment. The person was given the choice of 9:30 or quarter to 5. They chose the latter. There could have been many reasons for this choice, of course, but it does seem, based on previous phone conversations that we've overheard, that appointments early in the day are more available than later ones.

When she was ending the call, she said, "Bye. Bye. Bye, bye, bye. Bye, bye." This is common. Like a doofus, I used to try to match the byes to be polite. Then I heard people ending calls that way all the time and I realized that one "Bye" would be enough!

I've noticed that there are many "wee" things here. When we pay for our groceries we are always asked if we want a "wee bag." Even when we have had enough groceries to fill our backpacks and Chico bags, we are asked about a wee bag. The other day we were in the bank to deposit our income tax refund which arrived from Texas (because we live overseas, we had to send the return there) with our last name misspelled (how hard is it to spell "Burke?") and the town reading, "Kittybegs." Whatever. The woman at the bank asked Bill to provide his wee PIN number. Before that she asked if he had his wee card. Sometimes we are asked if we can wait just a wee minute or a want a wee bit of something. I find myself rather taken with this wee turn of phrase and I imagine there will come a day when I hear myself saying this. I have fun learning about the different ways people use the same language--dialects can be fascinating!

Summer has left us for today. It was actually pleasant while it lasted these last few days, but it is nice to get a break from all that sun and heat! Not sure when or if it will come back, but I kind of like this few days on/few days off thing.

I leave you with a wee photo of a wee creature that was in the sand at Fintra Beach the other day. It has fur. We have no idea what it is. 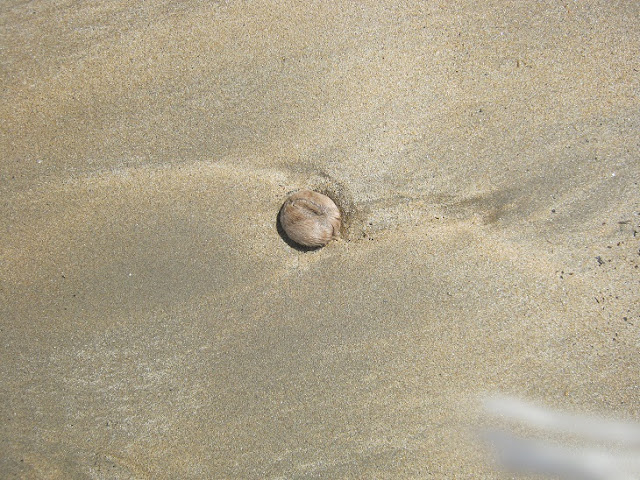