Yes, those home fires are burning--just not here in my home. I was surprised to realise in Ballinrobe during our first summer in Ireland that people have fires all year here. It took me a while to get used to the smell of burning peat. It used to turn my stomach, but as I got used to the smell things settled down and eventually I ended up burning some peat myself. Last summer in Killybegs I was surprised to find myself tending a fire in June. In our apartment here we have electric heat, which is something we are very happy about. We are definitely in the minority as far as preferring electric heat to an open fire--the fire is something that is elevated to a very high status here. It seems to be a deeply held and significant cultural norm. When we first moved in and had some issues, the caretaker and the two electricians were here and we were chatting. The electricians were checking the electric storage heaters and we were chatting. I mentioned that I was so glad to have electric heat and to be done with the open fire. They stood there staring for a minute before the caretaker commented, 'You would actually rather have electric heat? I love an open fire. I don't have one, mind you, but I wish I did.'

For those people who do have a fire, the coal man needs to show up at all times of the year. These guys were making their deliveries yesterday. 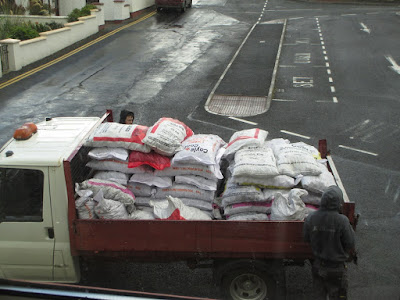 Looks like he had many stops. It has been cool and rainy lately, so more fires are burning than there were a month or so ago. I saw the truck out the kitchen window and thought how glad I was to be done with the fires in general but especially the coal. I remembered how it felt to taste coal dust all winter. Blech!

Also in my kitchen window are my plants-to-be. I have stuck yet another celery end in some water to grow some roots so I can plant it. I have done this more times than I can count! In Maine the only ones that grew well were organic knobbly-ended celery. In Ballinrobe I started a smooth-ended store bought celery and it grew and grew--best one I ever had. I gave it to our neighbour when we left. In Killybegs I had a good one, but it ended up rotting--the kitchen where it lived was always damp and humid and I probably over-watered, as I have a tendency to do. We shall see how it goes here. So far, so good. I have new growth and roots. 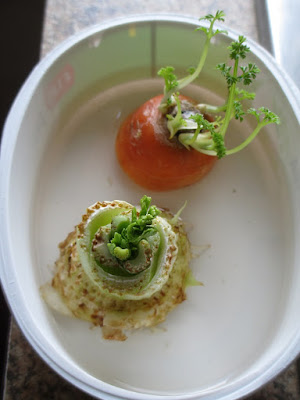 Since we are always happy to have houseplants, when I pulled a carrot out of the bag while making soup the other day, and saw the small stems growing out the end, I figured I might as well stick that end in the water too and see what happens. The green has gotten darker and grown, so perhaps we will have a lovely feathery houseplant someday in the future--who knows?