The other night I tatted a doodle as a test. 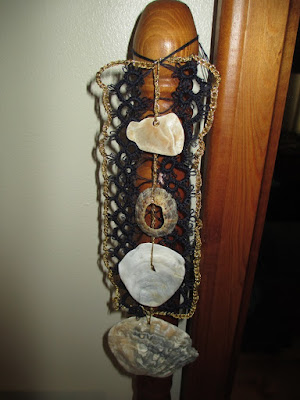 I have been wanting to see how my linen thread will work for needle tatting. Many months ago Bill bought me a huge cone on ebay. It is thin thread, so lots of yardage. I am working on a large crochet project with it, but I expect I will have leftovers when I am done with that. In order to use the thread multi-stranded and with a gold metallic thread, I have been winding the linen off the cone and into balls. I discovered that I can do this and read from my e-reader at the same time, so it breaks up the monotony of winding, winding, winding. I grabbed a couple of balls of thread, threaded two strands into my needle and started tatting. I works really well! The end result is good and it is comfortable to work with. It is a little bit stiffer and kinks more than the cotton thread that I usually use, but I expected that since I have been crocheting with it.

I had an idea for making my standard bookmark motif but with very long picots in the center of one side, which I would join as I made the other side. I have some ideas about crocheting a contrasting thread along the joined picots and possibly joining them in different ways. This is what I ended up with after the tatting. 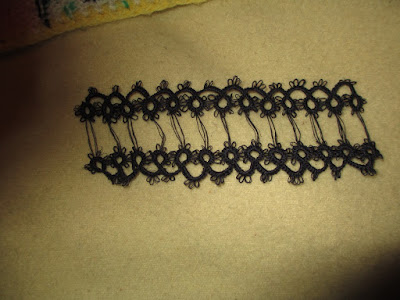 I took some scraps of metallic gold thread, held it double, and crocheted around the outer edge and into the picots on the outer chains. Then I simply chained down the center, separating strands of the picots and crocheting the left strand of one with the right strand of the next picot. I liked that and saw some potential for these kinds of doodles as building blocks for larger projects. I looked at the ends to weave in and decided to save them for the morning. When I looked at it then, I thought I might as well use the ends to tie some shells onto the doodle. We have some that have holes in them--these have been among the things we've brought home from the small beaches here. 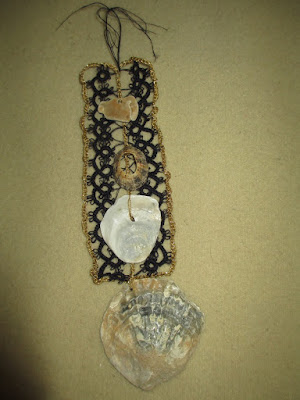 Maybe I will do some more tatting with whatever thread is left. Plenty of time for ideas to percolate and lots of thread still to wind and use! 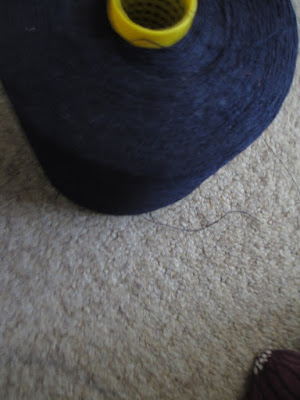