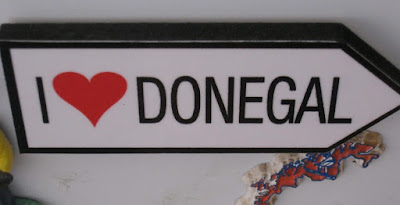 One month ago today we left Ballinrobe for the last time. Bill snapped a photo from the bus window as we started to pull out. 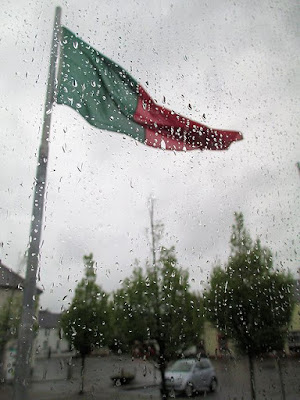 We were exhausted when we got here that afternoon, but the day was not without amusing conversation, though it was probably far more amusing for us than for the guy who struck up the conversation in the first place!

We were waiting in Donegal Town for the bus to Killybegs. There is no station there--all the buses, no matter their direction, stop in front of the Abbey Hotel, so the narrow sidewalk can be crowded at times. There we were with our luggage, waiting. We saw a guy get out of a car. Before long he asked us if we were waiting for the bus to Derry. We told him we'd gotten off of that bus and were waiting to go to Killybegs. He said he thought there was a bus to Derry at 1:30--that's what he'd been told (it was about 1:10). I directed him to the schedule on the wall. He came back and said the next bus was at 2:37. Then he went on to say that he and his wife were on holiday from Northern Ireland and staying at a local hotel, where they'd locked their keys in her car, along with her phone charger and a bottle of champagne. The locksmith they called could not get the door open, so dropped him off in Donegal Town to get the bus to Derry, where he could change buses to a company that had service to his neck of the woods. He would pick up his car and the spare set of keys to her car and drive back. I told him he was really going to earn that bottle of champagne!! He was eager to get going and did not want to wait the hour and a half until the next Derry bus and kept calling people to pick him up--no one seemed interested. When we got on our bus, he was still waiting and calling. I wondered in the month since how he and his wife fared!

When our little 20-seater bus to Killybegs pulled up, we dragged our bags to the back to place them in the small luggage compartment. The door would not open. There was another woman there with a suitcase and she tried as well. No luck. Bill told the driver, who came out and said the doors would not open, so we would have to bring our bags inside the bus! Of course we had our heaviest load yet and Bill was still dragging from the shingles. I was struggling to get up the stairs and the driver grabbed the smaller suitcase and placed it on a seat. The big, heavy, red suitcase had nowhere to go except next to his seat, so that's where it sat. When there was a free seat, he hoisted it up. When we got to Killybegs, he was kind enough to haul them down again. One of the passengers said to her companion, "Wow, they must be coming for a year or something!" Yeah, something like that :-) Then we dragged everything to the end of the driveway and up the hill in stages before hauling it inside and collapsing into our chairs. After a while we went out and got some dinner. We were both thrilled that it was done! I am sure the bus driver hopes to never see us again!

We took our time unpacking and settling in. There were a few things we needed and we readily found most of them at the local charity shop and a couple of small businesses in town (and we went back to get more pillows the other day--Karen O, you will have a place to lay your head!!). One thing we could not find was a dish rack. We looked in the charity shop, though I did not expect to find one there. We didn't. We looked in other places and did not see any, except for one double decker one that was too big for our available space. We just had to leave the dishes on the stainless steel draining area and let them air dry as much as possible before finishing the job with a dish towel. This meant we always had sopping wet towels! The other day we checked in at the charity shop, went to the kitchenware section, and I looked up. There, on the top shelf, was a purple plastic dish rack. I pulled it off the shelf. Then I looked down on the bottom shelf and spotted a metal dish rack. It was missing one spoke, but was much better than the plastic one, which I put back. 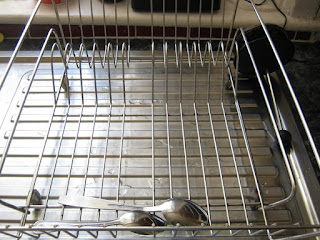 I was irrationally pleased to find this and every time I pick up a dry towel or a dry dish, I am pleased all over again!!

The wild rhododendron that is blooming on my windowsill also makes me very happy! Isn't it gorgeous? 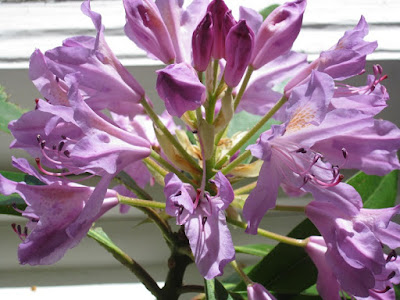 One month in and every day I still think to myself, "I can't believe I get to live here!"