I had this skein of black yarn with a silver metallic wrap thread that was one of several skeins Bill surprised me with a few months ago. It wanted to be a black and white hat. Now it is. It makes me think of a starry night sky when I look at it. 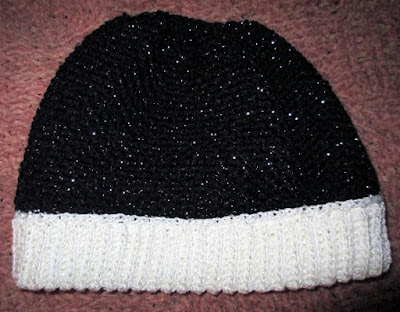 The ribbing is sc (US) through the back loop to make a strip that would fit around my head, slip stitching the ends together to make a tube. Then I folded it in half lengthwise and crocheted the edges together using hdc. I did this because the yarn did not seem like it would want to stay rolled up on its own. I am not sure of the fibre content of the white--a friend got it for me in a charity shop and it was on an unmarked cone. It's very firm and worked best crocheted rather tightly.

I attached the black and crocheted through the very back loop of the hdc stitches, alternating sc and ch1, skipping a stitch in between sc.  I worked around and around without joining, sc in each ch1 space and ch 1 over the sc stitches. When it was as tall as I wanted it, I did a few rounds of rapid decreases by doing a sc2tog in each of the next 2 ch1 spaces (ignoring the sc that was between them), ch 1, skip next sc, sc2tog over next two ch1 spaces and alternating around. I could also have just kept on going as I was and left a long tail when I ended off. This I could have used to pull the top closed by threading into a tapestry needle, weaving through the stitches, and gathering until the top was closed, weaving in the end securely.

The crocheted ribbing is a good way to start a hat because you do not need a pattern or a specific kind of yarn or hook. You can just make the ribbing until it is as long as it needs to be, either sew or slip stitch the ends together into a tube, and then work up from the edge using whatever yarn and hook you have. Or you could make the whole hat sideways in crocheted ribbing--it's a very good beginner project or just a fast and fun way to make a hat!