A Wee Bit of Sligo

How I ended yesterday: 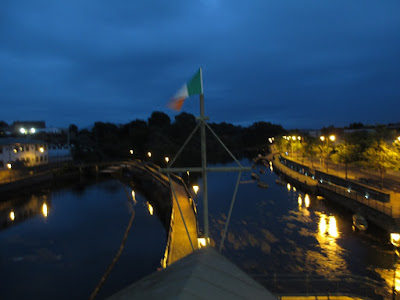 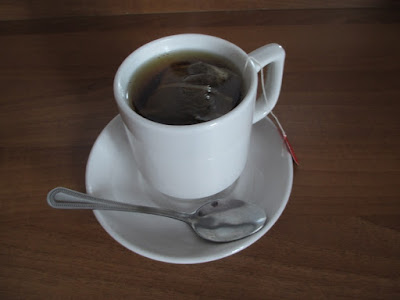 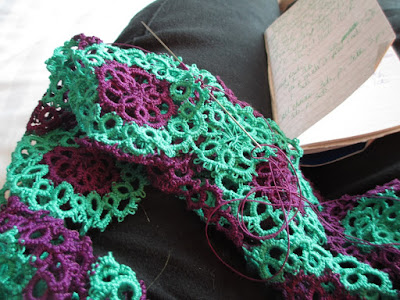 and listening to this on the TV in our hotel room. 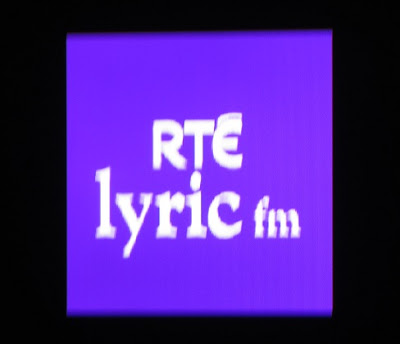 It was a peaceful and relaxing way to end a long and somewhat tiring day.

We had to take a trip to Sligo so Bill could have an appointment with a consultant as part of the process leading to cataract surgery and we stayed there overnight.

His appointment was not until 2:45, but since we did not know where we were going, we took an earlier bus so we would have plenty of time. This night owl was up at 5:30, which is not my thing at all. It was good though, since I had a lot of time to read on the ride down and we got there in plenty of time to find the hospital. It was just a matter of crossing the street outside the bus station and walking up the street for a while until we came to it. We went in, found out where Bill had to go, and then decided to find the hotel, since we had a lot of time to spare. We found it and then went back to the hospital to wait, only discovering later that we could have saved a lot of walking down one side of the river, crossing a footbridge, and then walking back in the same direction from where we'd come, but on the other side of the riverif we had known about the OTHER footbridge that was quite near the hospital at one end and the hotel on the other! ! We passed the entrance to the path that leads to that bridge several times without knowing that the path was even there. Oh well. The walking was good for us, though it was hilly and the backpack was heavy. It was nice to check in at the hotel after Bill was done with his appointment.

We sat for a while and then decided to walk into the main part of town to find a place where we could get some supper. The hotel is on John F Kennedy Parade, which turns into Rockwood Parade as you get close to the main road. These run along the river and there are many benches and seating areas along the way. We found a nice little sandwich/coffee shop where I had a yummy chicken club sandwich, cup of potato leek soup, and a large mocha before meandering back the way we came, snapping a few photos along the way. 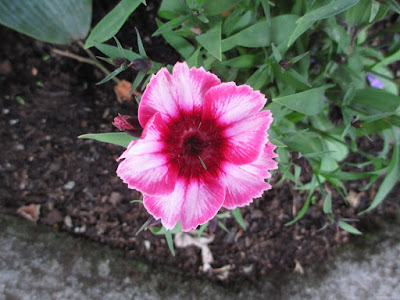 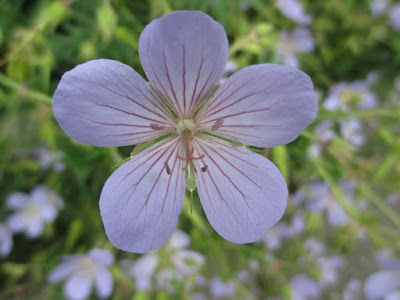 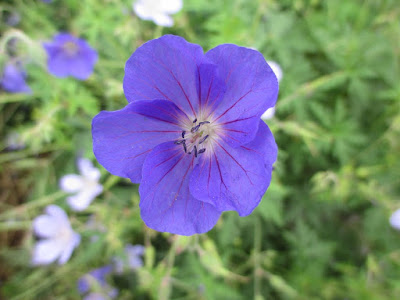 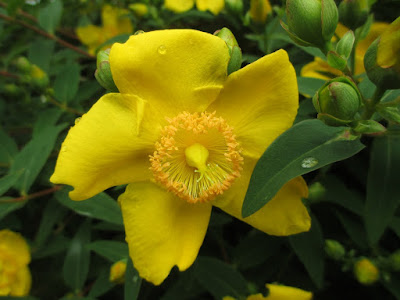 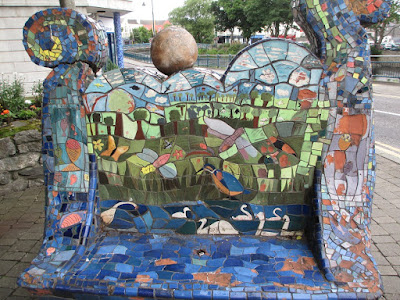 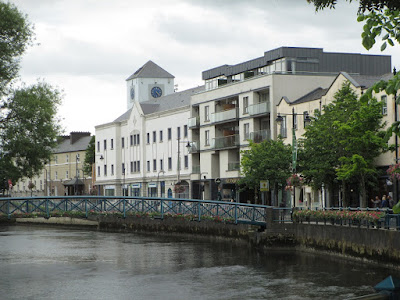 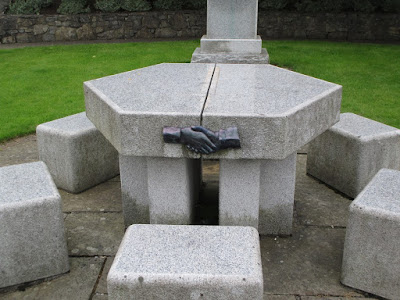 Sligo seems like a pretty multi-cultural community. This little shop was next to the hotel. 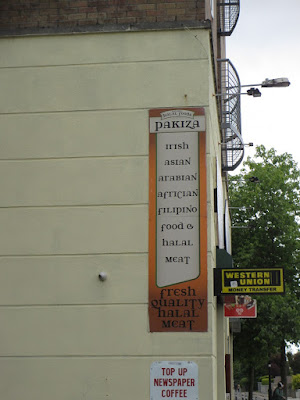 We walked a bit on the footbridge that we could have used and looked at the ducks. 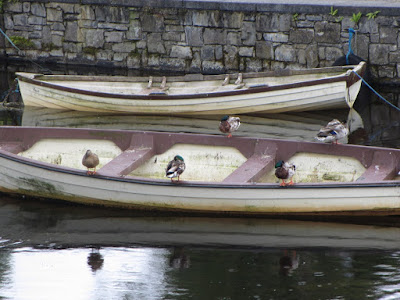 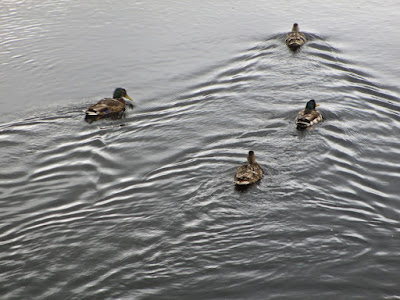 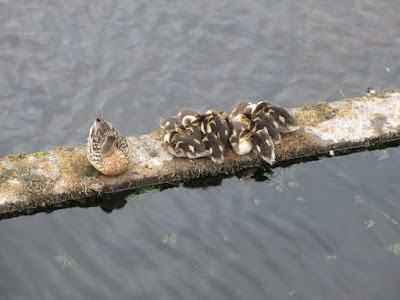 This is the hotel from the footbridge--we were on the second floor, which would be the third floor in the US. We are not used to this yet. Here it goes ground floor, first floor, second floor, etc. 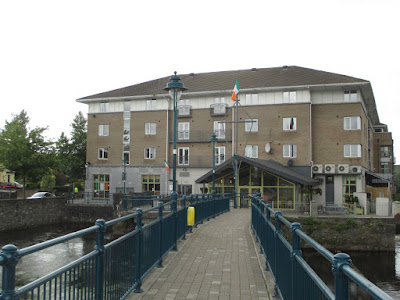 This is the Riverside Hotel and it was great. Breakfast was included with the price of the room, so we only had to go downstairs this morning to have a wonderful feast. There was an extensive buffet with breads, fruit, yogurt, pastries, breads, cereals (even homemade granola) and there was a nice menu as well, with various options from Irish porridge to a full Irish breakfast. We decided on scrambled eggs and smoked salmon to go with the fruit, soda bread, and yogurt with a bit of granola from the buffet. That hearty breakfast meant we were not hungry until well past lunchtime, when we had a snack between the buses that brought us home.

After breakfast we decided to check out and wander around for a little while before catching the bus to Letterkenny. The clouds were hanging low. 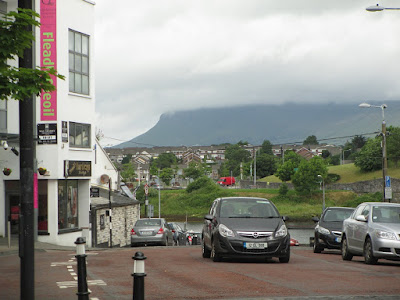 I think overall Bill liked Sligo better than I did. I liked the parade areas where we walked last night because they were pretty quiet and in some parts, only for pedestrians. The atmosphere was pleasant and it was peaceful. I was not crazy about the main parts of town though and Bill was finding things a bit annoying this morning as we meandered in the direction of the bus station. There was too much traffic and too many rushing people, some of whom were not even aware of other people around them, but had their eyeballs glued to their phones. The atmosphere in those areas was agitating. I was surprised to find out that the population is just shy of 20,000. The town sprawls out all over the place, it seems. Every time we would turn into a new street there were more rushing people, more stores, more traffic, and at least for me, more desire to be on my way home!

This was the first time I have ever seen anything of Sligo beyond the bus and train stations. The last time we were there was to pick up a friend from the train station--Friday it will have been a year since that day. We will be back, since Bill has another appointment like the one yesterday in two months time and then he will have the surgery in 4 to 6 months. It will be interesting to see whether my impressions are any different when we go back. For now, I am just really glad to be home. The hotel was really comfortable, but there's no place like home!
Share
Posted by Shari Burke at 21.6.16