We moved in three weeks ago today and now we finally have hot water in the sinks. Yay! It was actually an easy fix--took the plumber a minute or two, but it's not something we could've done ourselves. We have three ways to heat water for the sinks here (we have an electric shower, which heats the water for that). There's an 'instant hot water' heater in a cupboard. If we are running the boiler (kerosene), it will heat the radiators and the water. If we have an open fire, the back boiler in the fireplace will heat the radiators and the water. This is handy in winter when we actually want heat, but that's only 3 or 4 months of the year, so what we use most often is the switch (electric). It only takes 5 or 10 minutes and the water is very hot. Then we turn it off. The day we moved in, we turned it on and nothing happened. We waited. Nothing happened. Two and a half hours later nothing was happening. The plumber said that at some point, someone probably had the fire going for a long time or the fire and the boiler or something, and the water got too hot, tripping the overheat switch. I asked if we should know how to fix the problem if it happens again, thinking it would be a simple thing, but apparently, it involves removing bits and stuff. Never mind.

After walking a little more than 3 1/2 miles yesterday and the same the other day, my leg is tired and slightly achy today, so I went for a shorter walk. I've been pleasantly surprised at how things are going with that. The muscle that was hurt last summer continued to bother me, but I think walking has helped, because I realized a week or so ago that I wasn't noticing it anymore. The pain had gone.  After only three weeks, I feel much better physically and less stiff--I assumed I would loosen up once I could move around more again. I have still not had a headache, an upset stomach, or sinus problems since we've been back. I rarely even take any allergy meds now. What really hits home for me is how much ease I feel here. It's not that there are no aggravations and stuff. Life goes on and there are good days and less good days wherever one is. But in Moville, the first thing I did every morning when I woke up was to start giving myself a mental pep talk in order to convince myself to get out of bed. Then I would sort of rigidly move myself through each day, again having these mental conversations with myself--one part of my brain talking me into doing what another part did not want to do. What I wanted to do was stay in bed and sleep as much as possible. What I actually did was to keep myself occupied and distracted. It was tiring. When we found out we might be able to move back here, Bill commented that I seemed like my old self again. It is true that I feel different, physically, mentally, and emotionally. Still, even as I was talking myself through each day, I was noticing that I was drawing on lessons I'd learned years ago when living in a different place that was not good for my well being. I was pleased to have learned something at least and to handle a difficult living situation in a better way than I did then, although it took some time for me to get there. At the same time, I was aware of how privileged I am--it's not like I was in fear for my life or having bombs dropped on my house or anything like that.

This week, RTE aired an investigative report about illegal dumping and one of the things they reported on was the fact that there was/is an illegal, contaminated dump outside of Moville. Some guy has a skip hire company--we saw the skips sitting around and being transported all the time--and he was dumping the waste and burning it in the Moville area. The river that runs through town is also one of the most polluted in the country--raw sewage continues to be dumped into it. It's so sad. Moville is a nice little town and very scenic. It's not for me, but I can see, in an objective and removed way, that it is beautiful, full of great people, and has lots of potential. I know not everyone gets sick there, but how many people are getting sick and have no idea why--both visitors and residents? I hope they can clean things up there. The people who live there deserve better.

I happened to look out the window last night just about at sunset (10:10ish) and it was lovely, so I got my camera. 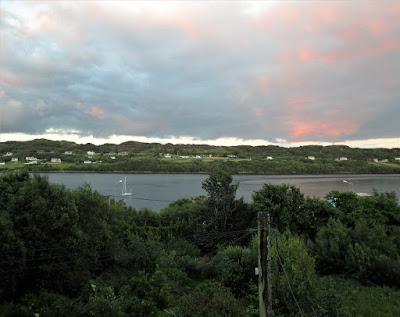 There are so many reasons I am grateful to be back here.
Share
Posted by Shari Burke at 22.6.18

I am thrilled that you are back in a place where you feel comfortable and 'at home', Shari. That is what life is about. I hate that feeling of being in limbo and that is where we have been for a year now. We will not be moving until Jan of next year and so I will continue to feel untethered. I did go back to work full-time so that helps because it keeps me distracted from the everyday things.

That is very interesting about the water heating solutions you have there-and the picture is beautiful!

If you are interested-There is a "fix" on my blog that seems to be working for those No Reply comments if you want to check it out. It is working for several of us-comments are coming into our email accts again.
Have a great weekend- xo Diana