Slow Going and More May Books

We are slowly creating order out of chaos as we get our stuff put away. It's the most summery summer we've experienced in Ireland and that is slowing me down. But I make some progress each day and one week after we moved in, we're getting there. I made the Friday night pizza for the first time in a few weeks--the bread machine was in the first load we brought down. I have it on a TV cart in the kitchen, along with the yoghurt maker and slow cooker and some cookbooks. I'd asked for the TV to be removed before we moved in and the letting agent asked if I wanted the cart. I did. It's coming in handy. I'll do some more organising tomorrow and I might just leave it all alone on Sunday and spend the day reading and stitching. I'll see what I feel like.

Here's a bit about a couple of books I read last month:
The Trouble with Goats and Sheep by Joanna Cannon
This is the first novel by this author. I requested it after reading her second, Three Things About Elsie. Like that book, this one was full of sentences and paragraphs that made me stop and read them again. Here are a couple of examples:

‘July had found its fiercest day yet. The sky was ironed into an acid blue, and even the clouds had fallen from the edges, leaving a faultless page of summer above our heads. Even so, there were those who still nurtured mistrust. We walked past cardigans draped across elbows and raincoats bundled into shopping bags, and one woman who carried an umbrella wedged into her armpit, like artillery. It seemed that people couldn’t quite let go of the weather, and felt the need to carry every form of it around with them, at all times, for safekeeping.’ (p 157)

As I recall, I pulled out a paragraph about September when I read the Elsie book--she’s good at describing seasons! Then there was this, about words and a 10-year-old girl.

‘I still hadn’t learned the power of words. How, once they have left your mouth, they have a breath and life of their own. I had yet to realize that you no longer own them. I hadn’t learned that, once you have let them go, the words can then, in fact, become the owner of you.’ (p240)

The story revolves around The Avenue, an English suburban estate, and the community of people who live there. Mrs Creasy, one of the residents, goes missing one hot July day in 1976, which causes great distress to the others, for many different reasons. As one of them pointed out, Margaret Creasy knew all their secrets, and when she went , they went with her. Grace and Tilly are 10-year-old best friends who spend a lot of time with a neighbour, Mrs Morton. One day, they attend church with her and Grace tries to talk to the vicar about god. He tells her that god is everywhere and somehow, Grace associates this with Mrs Creasy. She and Tilly decide to investigate, sure that if they can find out which house on The Avenue is where god is, they will also find Mrs Creasy. They start calling on the people in their homes and they start to uncover things that they often do not quite understand, although Grace, who considers herself the more sophisticated of the two, is often surprised by Tilly’s insights. It is Tilly who decides, while listening to the vicar speak at a funeral, that god has divided people into goats and sheep--but how to tell who is which? This is a question that recurs for Tilly, thus the title of the book.

The book is not completely from the point of view of the girls--it moves around The Avenue and each section tells a story from another person’s perspective. Within these sections, there are sort of subsections that take us back to the end of 1967, when a big event happened on The Avenue. Interestingly, while the 1976 narrative is moving forwards in time, from the end of June to the end of August, the 1967 narrative moves backwards. The first time we read about 1967, it is a few days before Christmas, and as each person remembers back to that time, it is a little bit earlier. Finally, we learn what Mrs Morton remembers about a day in early November, 1967.

I quite liked this book and I will be watching out for future novels by this author.

Broad Strokes: 15 Women Who Made Art and Made History (in That Order) by Bridget Quinn with Illustrations by Lisa Congdon
This is a collection of 15 short essays about the work and lives of artists, some of whom have been overlooked and are not so well-known in art history. Each artist is depicted by the illustrator at the beginning of their section. I loved this book. I learned a lot and enjoyed reading about these women, even if I was not always in love with their art. That said, I fell in love with Ruth Asawa’s hanging chain mail baskets.

It seems like such a long time ago that I read these books! As Bill pointed out earlier today, it hasn't even been a month since we gave notice at our old place. Once we did, things got a little busy. It will be nice to get everything put away and organised properly, but it's also nice to not have to rush. 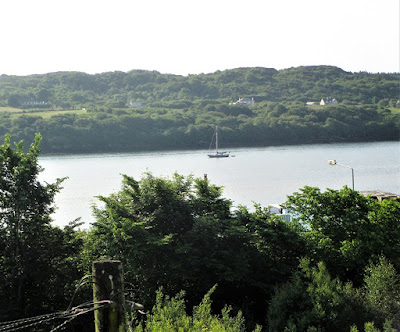