This morning, faced with a shampoo issue, I told Bill that there was no need for concern, because this is a house with yarn and I know how to use it! I grabbed a wee scrap ball of kitchen cotton and a 6.5mm crochet hook and in a few minutes, whipped up a shampoo sling. 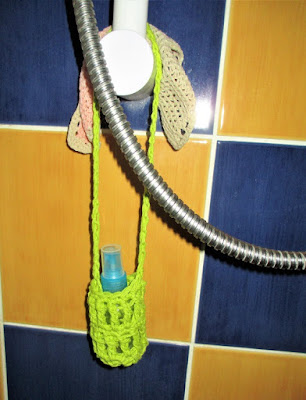 We have a very small shower. 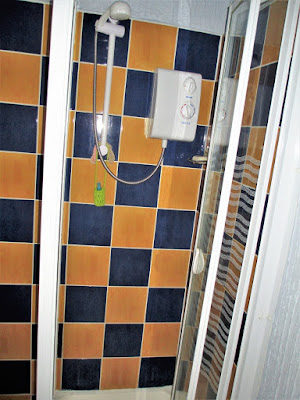 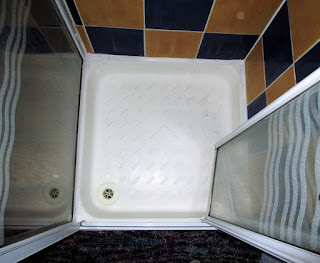 It's about the size of a phone booth (remember those?)--possibly slightly smaller. So we bought our bottle of shampoo and stuck it in a corner. But then I discovered that I did not have enough room to bend down and pick it up when I needed it, so I turned off the water (this is a good electric shower, so no bother about that), opened the door, and backed my ample behind out so I could reach it. Then I stuck the bottle on top of the electric shower unit. Bill didn't like it there, because he was concerned that it would slip off and fall on our toes, which we both have some issues with anyway. It's not like there's a lot of room to jump out of the way! The more we used it, the more slippery the bottle got and I could see that he was right. Of course, I assumed that yarn would somehow provide an answer, so I began to ponder. I considered making a bag to hang off of the piece that holds the shower head, but it seemed like the shampoo bottle would be too heavy. Then I thought of the little spritz bottles that came with me from the other house. Someone who lived there before us left a box stuffed full of them and, thinking they might come in handy, I took a few with me. I won't be spritzing shampoo, but I've filled the small bottle and we can simply remove the cap as needed. It's quite light, so I could make the shampoo sling for it and solve our problem. I knew yarn was the answer! It so often is.

The other day, I took some more scrap cotton and the same 6.5 mm hook and made a small pouch to hang off one of the hooks attached to the back of the kitchen door. The under sink cupboard is small, so I keep my tea towels in a canvas bag on a hook and wanted a smaller pouch for the dishcloths. It serves the purpose well. 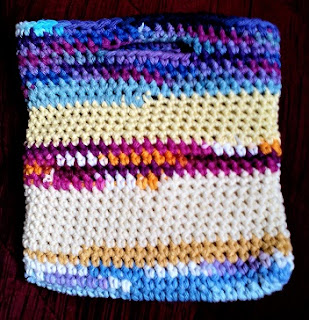 I do love my scraps.

Here are a couple more books that I read in May. I find that when I have a lot going on, my reading time is even more important to me, so I was particularly grateful to have so many books to choose from. Since we moved in stages, there were times when I wanted to be packing or doing something towards our departure, but couldn't yet. During those times when I was antsy, having a book to get stuck in was an extremely enjoyable way to focus my mind on something other than what I would pack next and how. At this point in the month, I'd decided to read some books that I'd picked up at charity shops and did not plan to keep, so I read them and we either stuck them in the wee free library or brought them to a charity shop.

The Saint Zita Society by Ruth Rendell
The ‘society’ of the title is a group of people who do service work for the well-off people who live on a street in London. Their lives are intertwined and there are secrets, mishaps, quirky characters, and a guy who feels he has to eliminate the people hosting bad spirits.

Burial Rites by Hannah Kent
This is a novel based on the true story of Agnes Manusdottir, the last person executed in Iceland in around 1830. As she awaits execution, she is sent to a farm where she engages in household and farm labour. At first the family is very upset to have a murdered there, but as she lives with the, works with them, and shares her story with the priest assigned to save her soul (which they cannot help but overhear), their feelings change. I found this book heartbreaking, gripping, and well worth reading.