Resolved, I Killed the Camera, and Books

It would appear that the Electric Ireland issues I wrote about yesterday have been resolved. I was surprised to get an email from them this morning--I thought that we'd have to wait until next week. We will hope that things can now proceed smoothly.

I dropped my camera last night--just about a foot and onto the window sill. But the lens was out and that was the point of impact. Now we cannot get the camera to work. Google was no help. Bill had an older wee camera that he'd gotten from someone at work years ago, so he gave me that. It should meet my needs just fine. He says it's a bit different, so I will have to play with it to see how it behaves. Here's one of the last pics I took with the old camera. 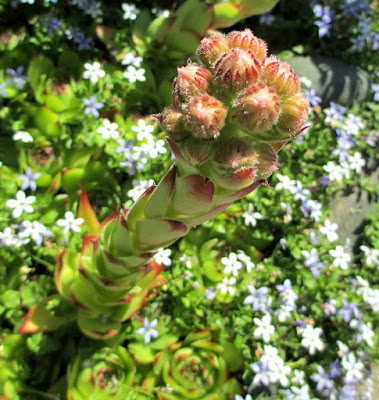 We started the month in disarray as we had to unpack and put away our stuff. We end the month settled and with everything in its place. As always, I read through whatever was going on. I was grateful for my e-reader when my books were at the bottom of the pile of stuff.

The Beggar Maid: Stories of Flo and Rose by Alice Munro
As the subtitle indicates, this is a collecton of stories about Flo (stepmother) and Rose (stepdaughter). Taken together, they tell the stories of the lives of these women--especially Rose. Rose grows up with her stepmother and her father, who run a shop in a poor Canadian town. Like the rest of the town, the family is not well off. Rose leaves, goes to college, and lives a very different life than most people in the town. The book begins when Rose is a child and Flo is relatively young. By the last story, Rose is middle-aged and Flo is elderly. I enjoyed this book a lot.

Postern of Fate by Agatha Christie
As we were unpacking a bit each day, we were without our books, since they were in the first load to be moved here, so were at the bottom of the pile. I grabbed my e-reader and chose a book from that. I remember having this in hardback as a teen--pretty sure the dust jacket was purple. I’d not read it in yonks, so decided to read it again. It’s the last Tommy and Tuppence novel and the last novel Christie finished before she died. Tommy and Tuppence, older and retired, have moved house and purchased some of the items that were in the house as well, including old books. Tuppence is looking through old children’s classics when she discovers a message written in one of them. She and Tommy set out to solve the old and forgotten mystery, reminiscing about their lives and past cases along the way.

Women of Mystery: The Lives and Works of Notable Women Crime Novelists by Martha Hailey Dubose
I wrote about this book here.

New Selected Poems by Eavan Boland
A collection of poems by irish poet, Eavan Boland. I’ve wanted to read her work for a while. I’d come across a poem or two in anthologies, but never any of her books. As I recall, I’d looked her up when we lived in Maine and they had nothing by her for me to request. I came across this while scrolling through the e-book section of the library.

Hope it's a great day in your neck of the woods!

I am so sorry about your camera, Sheri. I gave my not-so-hot camera away and have ended up using my cell phone. Someday I would like a better camera---when I have time to figure out how to use a better one!

Always love to see what you are reading! xo Diana