We went to Donegal Town this morning. The main mission was to go to Aldi for some frozen food and other stuff. We have a nice stand-alone freezer here, but I had not yet turned it on, since I just had a few things to go in it. I  remedied that today when I got some big bags of frozen veg, some mozzarella for pizza, various sorts of meatless burger/patty things, and some turkey sausages. I moved some other veggies over from the wee freezer compartment in our fridge and switched on the big freezer. Still plenty of room, but now there's enough inside to warrant using the energy to run it.

We had some time to walk around, so we wandered down a road we'd not been on before. 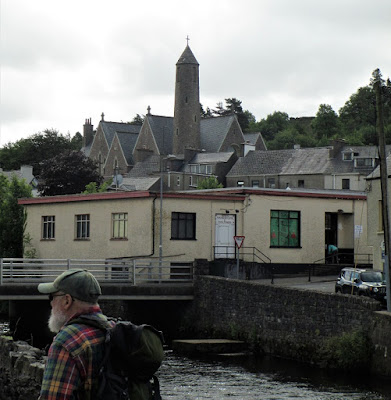 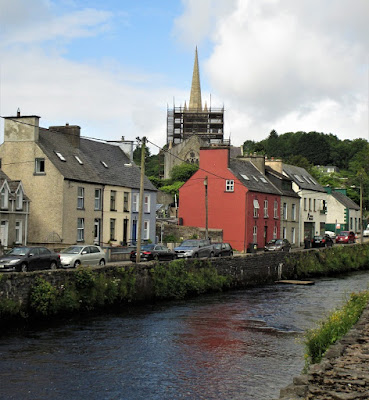 You're never far from a church here, and as we walked down the road, we saw one in the distance in front of us, and when I turned around, there was another one behind--that one is having some work done on the steeple.

We soon found ourselves on a main road that we'd walked partway down before. I had to stop and take a pic of this gorgeous purple flower. 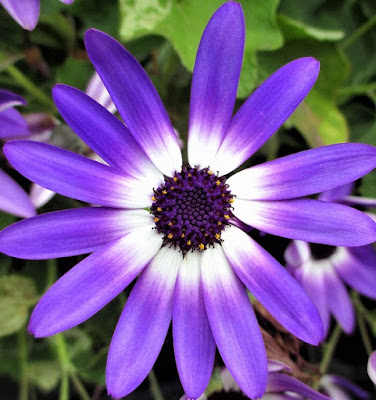 I was recently having an email conversation with a friend about colourful houses, so I've been noticing them more lately. This one stands out, but not in a garish way.

We decided to walk to the edge of town and call in at the Lidl. I was surprised to find what appears to be provolone cheese. I think they've recently had Italian week or something, so this must've been left. It's the first time I've seen provolone cheese, if that is indeed what it is, since we've been in Ireland. I bought four packages--two plain and two smoked--we'll see whether that was a good decision or not! 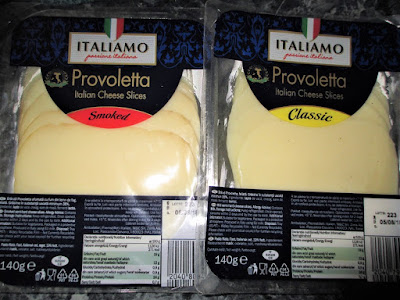 On the way back into town, I learned that Donegal Town is a fair trade town. 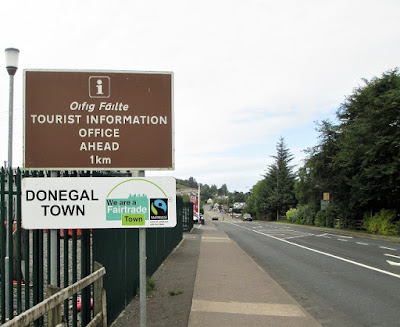 I had no idea what that means, so I looked it up and discovered that there are 4 goals to be met in order to get fair trade town status. First, a community group is formed to facilitate activities and encourage participation by groups and businesses--and they agree to serve fair trade coffee at meetings. Second, they organize at least one activity during Fairtrade Fortnight, while also raising awareness at other community festivals throughout the year. Third, they get schools involved. Finally, they promote increased availability and sales of fair trade products locally. Seems like a good thing.

When we got to the Diamond area, we stopped in at a Eurogiant in the hopes of finding a colander, since we've had no luck at the charity shop. We were unsuccessful here, too, but they had lots of scarecrows! 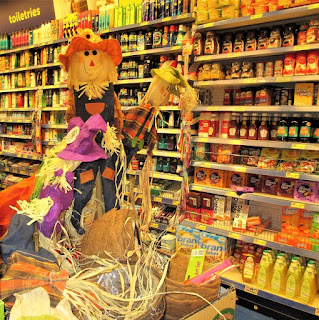 I think these are not meant to be autumn decorations, but I'm thinking of them that way anyway.

We sat for a while and ate our sandwiches, then went to Aldi, where I was surprised again--this time because they had rye flour--not something I've been able to find. 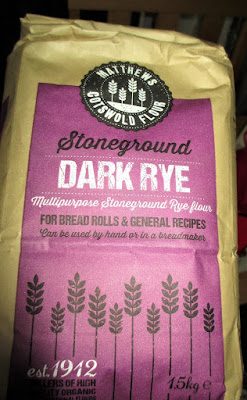 Finally, I spotted yet another strange crisp flavour. Like the lamb and rosemary, lamb and mint, roast ox, and other unappealing flavours I've come across in the past, I left them there for someone else. 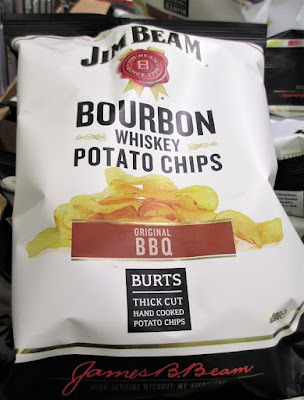 After Aldi, we caught the bus back home. Glad that's sorted!

Hope the week has started off well in your part of the world!