I've been working mostly on larger projects for the past couple of months, but have done some smaller ones during that time, too, just to make a change. 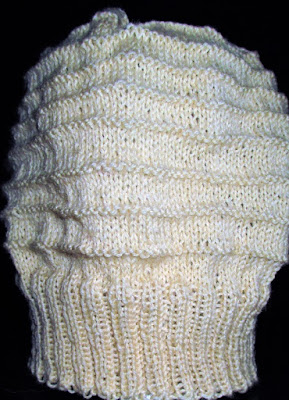 To make this, I used 2.75 mm (US size 2) 16 inch circular needles and the fingering/sock weight yarn to cast on 144 stitches, placing a marker, joining, and doing 2x2 ribbing for a few inches. Then I switched to knitting around, doing a purl round every once in a while to add a bit of texture. I decided on this one to keep going further than I usually do so I could do rapid decreases instead of the more gradual decreases I usually do. This made a more gathered crown, which I quite like. 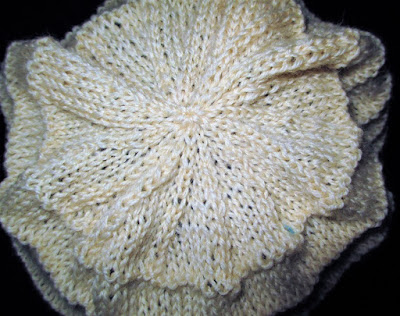 Bill mentioned recently that he would like another scarf. I nodded and started thinking. Neither of us mentioned it again, but I decided on the yarn and stitches to use and cast on, leaving it on his pillow when it was done. 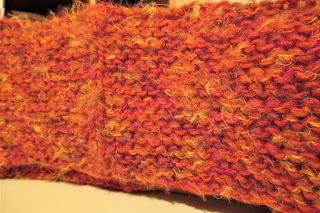 It has a very autumnal feel to me. It was hard to get the colour decent in the photo--kept coming up as bright pink! For this one, I did garter stitch (knit every row) with evenly spaced purl stitches on the wrong sides. I used the same stitches for this kitchen towel, where it shows up better. 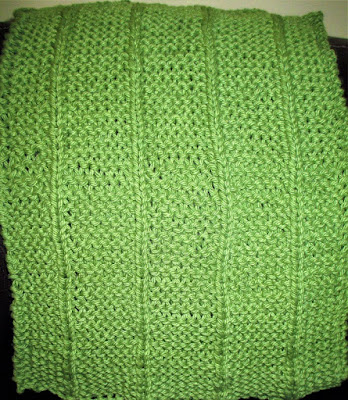 I've also done a bit of gift stitching, but that stuff has not yet arrived at its destination, so I'll leave it for another day! For now, I have 2 main larger projects on the go using more cones of yarn--one knit, and one crochet. Both can be easily picked up and put down without worrying about losing my place, so a few stitches here and a few stitches there makes some progress. And it's a really nice way for me to end my day--upstairs, listening to interesting podcasts or nice music and knitting for a while with a nice big cup of tea. Some days, I really look forward to that time!

I hope Tuesday is wonderful in your neck of the woods.

You do really beautiful work, Shari. That one piece really does have autumn colors and I love the green piece (matches my eyes)-lol

I hope you have a wonderful night, knitting with a cup of tea at hand. xo Diana