From Frogging to Finished

This afternoon I finished a project that I've been picking up and putting down, starting, ripping out, and starting again, and going back and forth about for a month and a half. As we moved from 2017 into 2018, I was crocheting the first idea with the oyster (off-white) yarn by itself. It wasn't working for me, so I ripped it out and thought some more. I started again with the blue and the oyster held together. I loved the way the colours worked together, but wasn't keen on how the project was going and ripped out again. I'd been working with the yarns (both fingering/sock weight and on cones) held together and did not want to cut them or attempt to separate the strands, so I ripped out and had a big pile on the floor between the cones and the couch for a few days while I made a third attempt, which was very much a 'let's begin and see where this goes' kind of project. Today I saw where it went and I am well pleased. 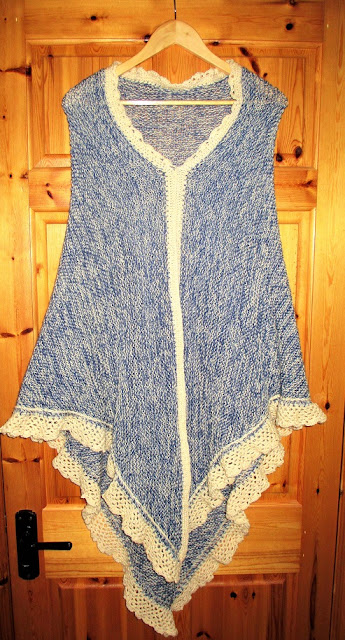 I started with the two strands held together and 6.5mm (US size 10 1/2) knitting needles, making a simple garter stitch triangle, using the same method as I use to make the first half of a diagonal dishcloth with eyelets--cast on 3 stitches and knit every row, doing a yarn-over after the second stitch of every row. This creates a hole when that yarn-over is knitted on the next row. I kept on until the triangle was as big as I wanted it. I used the oyster by itself and a G crochet hook to do slip stitches and chains in the eyelets. Then I started a border using just the oyster colour, making it up as I went along. Across the top of the triangle, I used half double crochet and did a lacy border on the other two sides. After a few rounds, I slip stitched up the top of the triangle, leaving a space for my head. Then I worked around the sides for a few more rounds. I finished the last round this afternoon and then went and did one more round like the last one around the neck opening.

Here's a closer look at the border: 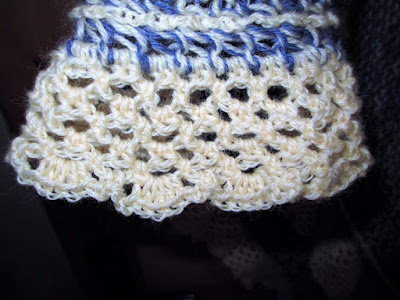 And this is the front stripe: 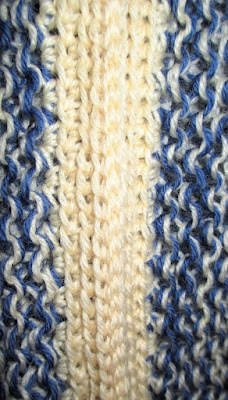 As you can see, the garter stitch ridges run vertically on the front. They run horizontally on the back. I suppose I could also wear this sideways, as an asymmetrical garment by wearing it with the strip on a shoulder and down an arm.

However I decide to wear it, I love the colours and the way it ended up. It was worth all that frogging--rip it, rip it, rip it! Sometimes, it just has to be done!

OHMYGOODNESS, Shari!!! That is absolutely beautiful. One of the prettiest tops like that I have ever seen. You did a fantastic job and I absolutely LOVE the color!!!
Happy evening to you- xo Diana