Discovering the Work of Karl Jenkins

This morning, I finished reading the book, Still with the Music by Karl Jenkins with Sam Jackson. 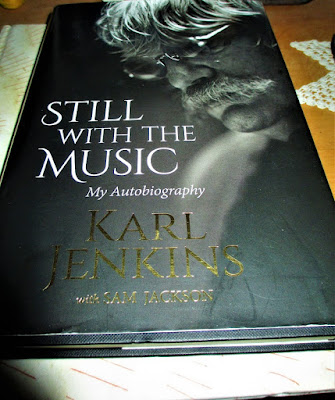 In spite of the fact that Karl Jenkins is apparently quite a popular composer, I’d not heard of him until I heard Benedictus on Classic FM. That led me to google, where I looked him up, discovered that it was from his work, The Armed Man: A Mass for Peace. The first time I listened to that, it did not take long for me to think, ‘This is not what I thought it was. I don’t think I’ll be listening to this again.’ But I decided to listen to it all the way through at least once. The next day I listened again. By then, I loved it. We are now adding much Karl Jenkins to our music collection. I have not listened to all of it yet. Some of what I have listened to speaks to me more than some of his other works.

When I saw that the library had his autobiography, I requested it. I enjoyed reading about the stories behind various works and about his life. I was intrigued by his use of the human voice as an instrument, particularly in his Adiemus series. I have become quite drawn to such music recently. In his case, he draws on his experience with jazz to create 'nonsense' lyrics, which serve to facilitate the voice as instrument. Other of his works have actual text. His wife is also a successful composer and they've collaborated quite a bit while each also working on individual projects. His son is a percussionist and is expert at how to use technology to compose music, so he is also a collaborator.

I love the ways in which his work is cross-cultural, drawing on many influences from all around the world.

I was fascinated by his creative process and his early, deep, and ongoing attachment to music. It is a fundamental part of who he is. I would have gotten more out of the book if I had some knowledge of music, but even though all I know about music is what I like, I am glad I read the book. In addition to learning about the background of The Armed Man: A Mass for Peace and The Peacemakers, along with works that I have yet to hear, there were a couple of other things that stood out for me. One was his discussion of people who write music criticism. In spite of the fact that his work is very popular among the general public, this is not the case with critics. This made me laugh because Bill and I were, just the other day, commenting on how often it is that we find stuff (music, books, etc) that is ‘critically acclaimed’ to be extremely unappealing.

On Friday evenings, there is a segment on the RTE Radio 1 show, Arena, in which two critics discuss 3 new album releases with the host. Often they do not agree with each other about the quality of the album. This time, with the first album, they did. Bill and I agreed with each other, too. They played an excerpt from one song, which neither of us liked. Then the critics started gushing about it, pausing only so another annoying and unpleasant excerpt could be played. They each gave it 4.5 out of 5 stars, mostly because it ‘was not boring.’ No, it wasn’t boring. It was quite annoying though! No stars from the Burkes! Bill turned off the radio until the show was over.

It was also interesting to read about Classic FM, which is a private radio station based in the UK. They also are widely ridiculed by critics, apparently, but have much higher ratings than BBC3, a similar, publicly funded radio station. We discovered it a couple of years ago when we moved to Moville--since we are on the border with Northern Ireland, it comes in here. There are too many commercials, but I have discovered quite a lot of music that I had not known about before, so I'm glad we found it.

One story that was near the end of the book that I thought was cool was about how, one night in 1997, Jenkins was walking around and saw a painting lit up in an art gallery. He was drawn to it and went to look at it through the window. The next day, he brought his wife to see it. She told him, ‘It looks like your music.’ He bought the painting and developed a friendship with the gallery owner. Eventually, he met the artist. The artist had no idea who had bought the painting, and was surprised when he found out, because he had been painting to the music of Karl Jenkins! I recently watched a short documentary about an artist, Ali Banisadr, in NY, but originally from Iran, who has synesthesia and paints music. Fascinating.
Share
Posted by Shari Burke at 19.2.18

Well how weird is that -that he bought that painting and the artist had been listening to his music!?!!! It is a small, strange world we live in, isn't it?

I have never heard of this composer but I will look him up before I go off to bed tonight. I hope you have a wonderful week, Shari! Hugs- Diana