For the past week, we've been hearing a lot about The Beast from the East, a weather system heading this way from Siberia. It's arrived in parts of the UK and I guess the leading edge is starting to affect eastern parts of our island. Cold temperatures (5 to 10 degrees below normal) are expected with some places getting down to -11C and by the end of the week, some places will see blizzard conditions unlike any the country has experienced since 1982. Even a little bit of snow causes problems here, where people are not used to it and where many people drive like maniacs on these winding, narrow, rural roads. They are warning of severe disruptions. We are not in the area that is supposed to get a lot of snow, which is just as well. We will get cold temperatures and probably ice/frost, so we decided to go to the shop today and get what we need in case the road and footpaths are slippy later in the week.

We've been drinking less coffee and more tea lately and the giant bag of 440 tea bags* that I bought over a year ago is almost gone, so I went to the tea section and discovered a new(ish?) kind of tea that I'd not seen before, and I picked that up, too. 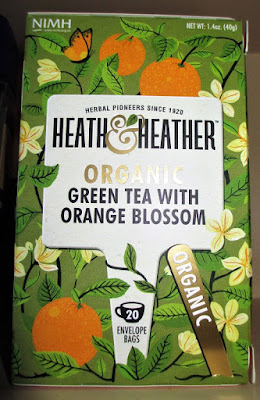 When we got home, the wholemeal raisin bread I had going in the bread maker was just done, so I put that on the rack to cool while I put away the groceries. Then I made myself a vat of my new tea and munched on a nice, warm, buttered end slice--yum! I love this tea and will get more, if they have it when I go back. One never knows what they will have from one day to the next.

I plan to make more ricotta tomorrow. I made a small batch on Friday and it's almost gone. Turns out that toasted homemade raisin bread, spread with homemade ricotta, and topped with jam (raspberry, strawberry, or lemon marmalade) is delicious!

So we're all ready with food, yarn, music, and books. We can keep ourselves entertained and well fed as The Beast from the East does what it will in our little spot up here on the edge. I hope there aren't too many problems for people around the country and that everyone is safe at the end of it!

*While it is common in the US for various things to be sold in supersize packaging, that is not the case here. For one thing, many people just would not have the space to store large packages. Stores also would be pressed for space, ranging as they do from tiny to small to sort of medium size (which I love--would not want to be in a big store anymore). So there are almost no 'family size' packages or the kinds of things you'd find in a warehouse store in the US. Exceptions to this are frozen chips (fries) and tea bags. This is not surprising.
Share
Posted by Shari Burke at 26.2.18

Hi Shari- I hope you don't get hit too hard with the Beast from the East. It is always a bit hairy when that kind of weather hits. We used to get that in the mountains of PA all the time- snow/ice storms. We would lose power sometimes for days and would have to dump the milk from a 50 head dairy herd out back...to say nothing of having to milk by hand because the milkers were powered by electricity.

I used to use toasted raisin bread with ricotta and jam on it, too! Haven't had that in a long time but it makes my mouth water. It always tasted like Danish to me.

Hope you have a great upcoming week. I am taking it easy today- did too much the last few days- and it all kind of caught up with me today. xo Diana