Then There Was Light

Yesterday on our way to the shop we called in at the library to return a few books. One of them was one we'd both read, called Then There Was Light. It's a collection of reminiscences about the rural electrification scheme in Ireland. 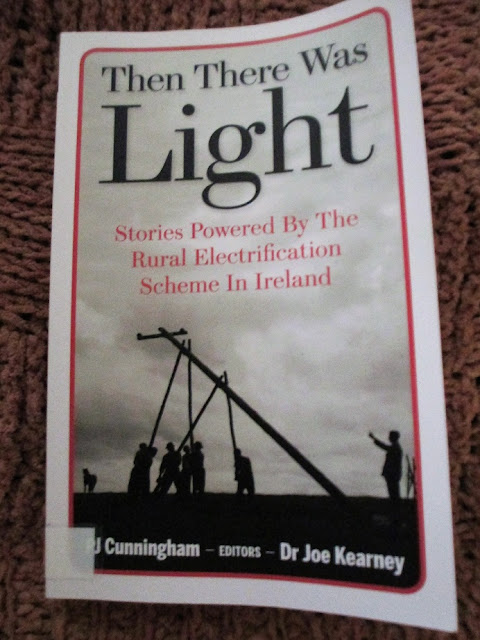 It was a fun read. I have always taken electricity for granted--it has always just been there. When I flipped  a switch, the light came on. When we lived in Alaska, there were a lot of people around that did not have electricity or running water in their homes. While we lived for a couple of years without running water, we always had electricity.

It is different here for older people who remember what it was like when there was no electricity in homes and how it felt when they got it. This book is full of stories about that, from people who worked on the project and what sorts of attitudes they encountered to people who were small when this new and amazing thing came into their lives. I'd read a little bit about the latter in other books--people talked about how suddenly you could see the cobwebs in the corners.  😊

When we lived in Ballinrobe, our neighbour invited me to her birthday party (women only) and I was sitting and chatting with a friend of hers. Both our neighbour and her friend had lived in Ballinrobe as children, but the friend had gone to Chicago as a teenager in 1966, where she lived with an aunt and uncle for 5 years, before returning to Ballinrobe. She said when she left, they had a single bulb hanging from the ceiling in one room of their home. She arrived in Chicago at Christmastime, so the place was even more lit up than usual. She talked about how amazing it all seemed to her then.

Some of the funniest parts of the book were the responses of people who were not keen on this newfangled thing. Some refused permission outright and never backed down, so their homes did not get electrified until after the person's life on this earth had ended. Usually those left behind wasted no time in having the electricity brought in after that. Some people were resistant for a while, and then caved in, sometimes after assurances from the ESB  (Electrical Supply Board) man.

I will not soon forget the story of the woman who refused permission for the poles and wires to go across her property. When the ESB man asked why, she said that if she allowed it, that would provide access to the neighbours across the street and it was rumoured that 150 years ago, their ancestors had helped those in opposition to Irish independence. No way she was going to be helping those traitors! So the ESB guy assured her that if she gave permission, he would see to it that her poles and wires were not involved in the electricity supply to the house across the road. She agreed and he kept his word, making sure that their power came from a different spur.

Some people allowed the electricity in, but did not want to use it. One woman would not drink tea made with water boiled in the electric kettle because she was afraid to be electrocuted. Another left the electric cooker her son had given her as a gift unused for a year, until he was due home for a visit. At that point, she called ESB and asked for a rep to be sent out to show her how to use the thing. She was famous for her brown bread and asked, 'What if that yoke won't cook brown bread properly?' So the rep assisted while she baked a loaf of brown bread in the yoke (thing) and the woman's fears were laid to rest. 'You can hardly tell the difference,' she said when it was baked and they were having a slice with a cuppa.

Moville was mentioned because many of the poles for Inishowen were brought by boat and unloaded at the pier here. Inishowen was a tough place to get the poles moved and set up, because of the remoteness, the state of the roads, and the terrain.

I raced through this book because I enjoyed it so much. The stories were amusing and a wonderful window into a specific time of change in Ireland's history. They were also a reminder that so many of the things we take for granted were once considered modern marvels.
Share
Posted by Shari Burke at 8.12.16

There were places in Appalachia that didn't get electric until recently, and my grandmother's was one of them. Granny was not sure she wanted "the juice" in her walls. My father was an electrical engineer. He took her wires and switches and showed her how when she turned a switch, "the juice" was cut off. What really did it though, was my mother pointing out to her how she was always so terrified we grandchildren would knock over the kerosene lanterns, and if she got electrified, she could put the lamps away. That was what finally did it for her. Plumbing in that old house though, never consisted of more than a line to the kitchen sink - we used to joke about "cold water in the winter, tepid in the summertime."

What great story! Thank you for sharing it. It really must have taken some getting used to--the idea that this invisible 'stuff' running through the wires somehow provided power--light, heat, etc. We were lucky in Alaska with the water--no running water, but we did have a septic tank, so did not have to use an outhouse as so many did. It would not have been fun to have to go outside to use one of those when it was -40!